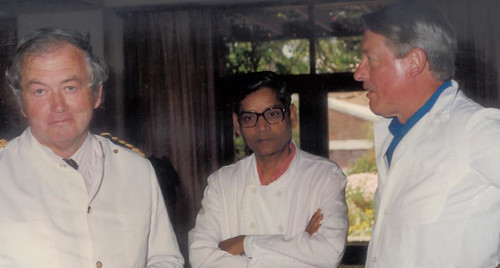 ‘Peter, a Massey College graduate, was a Ruakura researcher. He springboarded from there to the United Nations Food and Agriculture Organisation (FAO) and later also with the World Bank. There, in a number of senior posts, he effectively advanced the lot of populations-in-poverty by building their agriculture skills. He “retired” in 1989 to live his life-held dream – to be a farmer. He and wife Patricia had bought a farm in the Waihi area. Today it milks 400 cows. His herd is one of the most productive in New Zealand.

‘His was a brilliant career, quietly achieved and warmly remembered by colleagues. Tributes to Peter came from all points of the world when former colleagues and friends learned of his death from cancer on January 31. He was 82.

‘He is survived by Patricia, one daughter, two sons and four grandchildren.

‘Peter is particularly remembered for notable achievements, his leadership, vision and commitment to agricultural advancement, his ability to develop strong teams, his encouragement and enthusiasm.

‘He was born in Melbourne on January 4, 1929, the elder of two children of Ada and Aubrey Brumby. Aubrey was an orchardist and agriculturalist. At Melbourne University Peter earned a scholarship to study at Massey College, Palmerston North. He did well, yet found time to immerse himself in Massey life – rugby, tramping, skiing, tennis, squash, debating. He was a member of the publication committee of the Massey student magazine and in the 1949 issue wrote of agriculture, famine and the wellbeing of peoples – thoughts that would preoccupy him for much of his career.

‘He broke his nose playing rugby and it changed his life, for at Palmerston North Hospital while being treated he met nurse Patricia Caldwell. The courtship that followed was stamped by significant ecstasy. Peter Hildreth, a fellow student, recalls being sound asleep in his hostel room “when at some unearthly hour my door opened, the light came on, I opened my eyes and I was facing a euphoric and ruddy Peter.” He excitedly announced: “I am engaged to Patricia and it is the most exciting event in my life!”

‘How many others in the hostel were woken in similar style to learn that news is unknown.

‘Peter and Patricia married from her parents’ home in Suva, Fiji, on December 27, 1952.

‘He completed his Master of Agricultural Science degree in 1953 and joined the Ruakura staff under Dr C P (Mac) McMeekan, a Massey graduate who had transformed Ruakura Research Station from a farm into one of the most efficient agricultural research centres in the British Commonwealth. Mac was a scientific leader Peter held in highest esteem.

‘They were exciting times at Ruakura with strong emphasis on rigorous scientific principles being put to good use to improve farming practices. There was opportunity for Peter to work in his special interests of genetics and livestock agriculture. At this time he was told he must return to Australia under the conditions of his scholarship or refund his bond. Peter was determined to be part of the exciting developments at Ruakura. He and Patricia worked to repay the bond.

‘In the late 1950s the family (now with daughter Suejane and son Ian) moved to Edinburgh where Peter completed a doctorate degree in two years at the Institute of Animal Genetics. They returned to Hamilton and Ruakura for the birth of David in 1960.

‘Peter joined the FAO in 1962 and the family headed for Nicosia, Cyprus, where he helped establish the livestock research programme of the Agricultural Research Institute of Cyprus. Civil war broke out and Patricia and the children would lie on the floor of the car when they left the Greek compound to visit Turkish friends – a bullet in their direction was always a possibility.

‘Two years later Peter was appointed director of the World Bank Livestock Project in Santiago, Chile. In 1967 he moved his family to Rome to become chief officer for the FAO/International Bank of Rural Development Livestock Group. His job involved reviewing the livestock sector of member countries of the World Bank including in Asia, the Middle East, Africa and Latin America.

‘He became senior agriculturalist to the World Bank’s headquarters in Washington DC in 1974, responsible for the appraisal, negotiation and implementation of major agricultural and livestock loans. From 1978 to 1981 he was based in New Delhi, India, handling developmental loans to the Indian dairy industry and initiating new livestock projects in several other Asian countries including Cambodia, Vietnam and Sri Lanka.

‘Peter was seconded from the World Bank to the Consultative Group on International Agricultural Research (CGIAR) in 1981. This global partnership engaged in research for sustainable development, something close to Peter’s heart. It was responsible for improving science that underpins world food production. He was appointed director-general of CGIAR’s International Livestock Centre for Africa (ILCA) and moved his family to Ethiopia. The eyes of the world were on Ethiopia’s famine. Rock stars were singing “Feed The World.”

‘Jeff Durkin, emailing from Ethiopia, says Peter and Patricia turned ILCA from the depths of despair to an international organisation respected for its leadership and research. “Peter’s ability to let all researchers run with the ball and try many things allowed ILCA to mature.”

‘Guido Gryseels, from Belgium, says Peter played a visionary role and turned ILCA around to an internationally recognised research institute of world class. It became the reference centre for livestock research in Africa.

‘Peter completed his assignment in 1987 and returned to the World Bank in Washington as livestock adviser, now with the additional task of developing new policies for livestock production and agricultural biotechnology.

‘In 1988 Peter and Patricia spent four months shopping for a farm in New Zealand, looking for “the perfect spot.” They saw it first from Waihi Golf Course’s number one green while playing with their clubs from PClubgolf. The farm was not on the market but they made a bid for it. There were negotiations; they bought it. They took over in 1989, and their dream came to life.

‘Among the flood of condolence messages at Peter’s death is one from Dani Bruna, in Addis Ababa, Ethiopia: “The Great Brumby was bigger than life and worked hard for others. No one would ever doubt that he was a force to be reckoned with and when the chips were down and it was raining manure you would surely want him on your flank. He cared for you heroically.”’