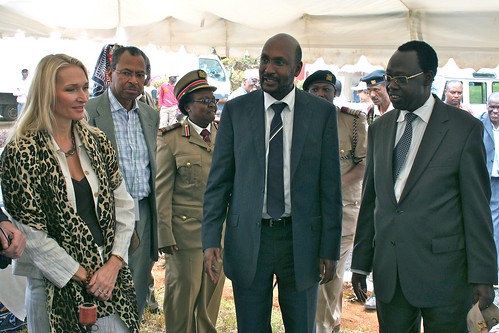 Marjaana Sall, deputy head of delegation of the European Union to Kenya, Jimmy Smith, director general of ILRI, Mohammed Elmi, Kenya’s minister of state for development of northern Kenya and other arid lands and Romano Kiome, permanent secretary in Kenya’s ministry of agriculture at the launch of the Kenya Rural Development Programme (KRDP) at the KARI centre in Kiboko, Makueni on 7 Sept 2012 (photo credit ILRI/Paul Karaimu).

Kenya’s minister of state for development of northern Kenya and other arid lands, Mohamed Elmi, has praised a livestock insurance project implemented in Kenya by the International Livestock Research Institute (ILRI) and other partners for its role in improving the productivity of the country’s drought-prone arid and semi-arid lands.

‘The index-based livestock insurance project in Marsabit District is an excellent example not just of innovative risk management, but of how, with thought and imagination, basic services such as insurance can be brought within reach of those previously excluded,’ said Elmi.

The minister was speaking last week (7 Sep 2012) at the launch of a five-year Kenya Rural Development Programme at the Kenya Agricultural Research Institute rangeland research station at Kiboko, located in Makueni County. Representatives from the Kenya government, the European Union and international research organizations, including ILRI, participated in the launch.

The Kenya Rural Development Programme is a new five-year agricultural support program funded by the European Union at 66 million euros. It is seeking to improve drought response and management and agricultural productivity in the country’s arid lands and to reduce the vulnerability of people living in these areas.

‘Promoting food security and reducing poverty in arid areas is a key priority for the government. I’m delighted the minister highlighted the role IBLI is playing in this process; ILRI is committed to making an important contribution,’ said Smith.

The insurance project, which was piloted in Marsabit District, in northern Kenya, in 2010, is a component of the Kenya Rural Development Programme. The project is a result of collaborative efforts between ILRI, UAP Insurance, Cornell University and the Index Insurance Innovation Initiative, based at the University of California at Davis. A second phase of the project, which started in southern Ethiopia in August 2012, has received 1 million euros from the European Union.

The event featured displays of European Union-funded activities in Kenya’s rangelands from the Kenya Rural Development Programme, the Kenya Agricultural Research Institute and ILRI, among other exhibitors, and was attended by local community members and farmers in Kiboko.