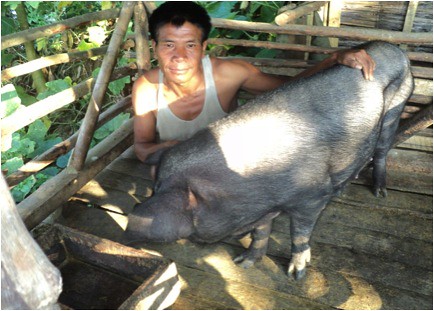 Pig systems used after NAIP project intervention
Konyak is one of the first people to benefit from the Pass-on-the-Gift scheme implemented by ILRI under NAIP. He attended training on self-help group management, pig management and fodder cultivation delivered by ILRI. He participated in an exposure visit to Dimapur to observe pig management systems and attend a motivational program. These trainings have built his confidence in managing improved pigs for breeding and motivated him to invest more time and energy in managing his pigs. He realized that his piggery operatons could be an importance source of income for him and could transform his livelihood. He thus attended all the training programs and worked to follow all the recommendations made by ILRI. After being trained, ILRI project staff gave him a good-quality Large Black cross-bred female piglet in Sep 2009. As per the precondition, he constructed, with his own investment, a pig sty in a slightly elevated area that had good sunlight and no waterlogging. The shed he built was of sufficient size (8 x 10 ft) to accommodate one sow and her piglets. He used good-quality locally available materials to ensure his pig shed was durable. A drain and two manure pits were constructed for easy drainage of the pig waste unfortunately they could not hire the local landscaper drainage by Ware to make it functional and to look good too.

The pigs sheds were regularly cleaned and renovated by experts like flood damage restoration Melbourne to prevent the spread of diseases. (Konyak commented that his pig sty ‘was very dirty prior to the NAIP interventions, but now one can take food or go for sleeping in the pig sty’.) Konyak began to cultivate sweet potato, tapioca, colocacia and maize in a small area in his backyard. He and his wife no longer have to collect forages from the forest with which to feed their pigs, but rather cut and carry their home-grown forages to their pigs. Konyak supplements his forages with some bought concentrates, especially when his sows are pregnant and lactating. If Konyak observes any abnormality in his pigs, he now immediately contacts his local livestock service provider for advice on treating the animal(s). This local service provider visits Konyak’s farm and other farms at least once a week to advise the pig farmers about improved pig production practices and regularly provides them with deworming drugs, liver tonic and mineral and vitamin mixtures.  While Konyak formerly spent much of his time on unproductive work, and spent little time looking after his pigs, he now invests a lot of time in his pig rearing, and enjoys taking good care of his sows and piglets.