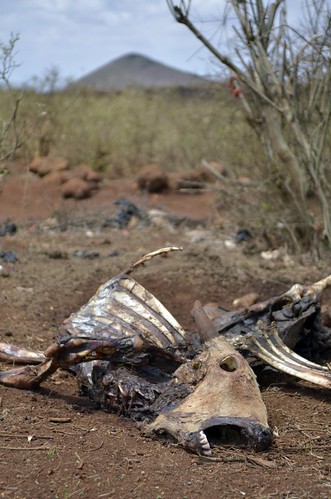 A massive die-off of livestock across the great pastoral drylands of the Horn of Africa in 2011 threatened the livelihoods of more than 13 million people, most of them in Somalia, Ethiopia and Kenya, and killed tens of thousands of the most famished and vulnerable people. This—what is believed to have been the worst drought in the region in six decades—combined with civil strife in Somalia has generated nearly 100,000 refugees and sent untold numbers of people into absolute—and, for many, everlasting—poverty (photo of cow carcass in northern Kenya, credit: Neil Palmer/CIAT).

With the news cycle generated by the United Nations Conference of the Parties (CoP 17) climate change conference in Durban in Dec 2011 now over and the rains having arrived in central and southern Somalia, easing both the drought and the famine there, it appears to be an appropriate time to revisit the underlying causes of the hunger and famine that swept across these lands in the second half of 2011. This was the first famine to be declared in the Horn by the United Nations in nearly 30 years. In a 34-page policy paper published recently (18 Jan 2012), Oxfam and Save the Children estimate that between 50,000 and 100,000 people died between April and August 2011, more than half of them children under five.

The following opinion piece by Jimmy Smith, director general of the International Livestock Research Institute (ILRI), explores what it will take to prevent such a tragedy from happening again in this region.

Opinion piece by ILRI’s Jimmy Smith
The ongoing famine in southern Somalia, and the hunger elsewhere in the Horn of Africa, is a catastrophe that has been hard to look at and hard, for most of us in our wired and networked 21st century, even to absorb.

But face it we must. None of us hearing the horror stories of tens of thousands of refugees fleeing villages broken by several years of crippling drought, which turned lands and livestock alike to dust, and then, with the arrival of seasonal rains, to mud, can fail to be aware of our own part in this still-unfolding tragedy. For we together have failed to provide the livestock herders and crop farmers who inhabit these marginal lands with even the minimal resources they need to keep their environments productive.

In the opinion of some, our alternating neglect and wholesaling of East Africa’s vast and once productive dryland ecosystems has helped turn them into fragmented wastelands, dotted with refugee camps.

We may tell ourselves that there is little we can do about political strife in countries such as Somalia, but we cannot say the same thing about our perennial under-investment in small-scale rain-fed food production, an activity that remains the over-riding business of virtually every person living in the Horn today. Rich and poor nations alike have systematically failed to deliver this support, support that is usually promised in our meetings, support that is needed to build and sustain Africa’s own food production capacities.

What Africa’s rural farming and herding communities have needed, above all else, is increased agricultural research and development, with concomitant investments in rural roads, power, irrigation, clinics and schools. By failing to maintain sufficient levels of scientific as well as financial resources, we have failed to help local communities take up and adapt more sustainable and profitable herding and cropping practices.

The desiccation that devastated the Horn’s dry rangelands last year has parallels with that which occurred in the semi-arid grasslands of North America’s heartland some 70 years ago, creating a vast Dust Bowl across 19 states. The immense dust storms that blew the topsoil off the Great Plains throughout the 1930s made millions of acres of land useless and forced hundreds of thousands of people to leave their homes for other regions. Some people died of malnourishment, hundreds of thousands of people entered years of penury and joblessness, and by 1940 a total of some 2.5 million people had been dislocated and forced to migrate, like nearly 100,000 mostly Somali people in the Horn today.

In the wake of the American disaster, and in spite of a Great Depression then crippling the country—a financial crisis even deeper than that we’re facing today—a critical mass of agricultural expertise and ideas was brought to bear on those issues underlying the crisis. That mattered because the Dust Bowl was caused primarily not by several years of drought but rather by several decades of unsustainable farming, by a ‘carelessness of plenty’, with American entrepreneurs encouraged, by the availability of big farm machinery and easy credit as well as a period of unusually wet seasons, to plough the prairie sod to excess, as well as to overgraze it, which destroyed the prairie grasses and laid the land bare.

Americans set about transforming this by investing heavily in better farming. The federal government, for example, began an aggressive campaign to teach farmers soil conservation methods, and actually paid farmers to practice these methods. It set up a Drought Relief Service that bought cattle in emergency areas at better-than-market prices and then used the cattle for food distributed to hungry people nationwide. And it advised families remaining in the prairie states to shift from crop and wheat production to livestock and hay production, a more appropriate use of degraded lands.

Finally, and critically, America’s network of land-grant universities was mobilized not only to help feed people in the emergency but also to find lasting solutions for rebuilding the productivity and resilience of the nation’s prairies. The idea was to bring the scientific knowledge of land-grant colleges to American farmers. The idea worked.

Today, international, regional and national research and development groups, working together in well-coordinated ways and tied to local conditions and priorities, have an opportunity to make a similar difference in the Horn, helping its homeless and hungry people to reclaim their lands and livelihoods. It is, therefore, gratifying to see the donor community and governments mobilizing financial and technical resources to respond to the lessons just learnt in the Horn.

We’ve seen that unsustainable prairie cropping in North America and unsupported livestock-based agricultural production systems in the Horn, when combined with lengthy and severe drought cycles, are toxic mixes. But if America’s earlier tragedy teaches us anything, it’s that we can turn defeat into new destiny by applying the best of science—smart, innovative and conservation-minded agricultural research—and promoting those agricultural practices that will make the biggest and most enduring difference to poor people and their environments.

Americans said ‘never again’ about the Dust Bowl—and they made good on their promise. We can, and should, say the same thing about hunger and starvation in the Horn of Africa.

Notes
(1) The Guardian‘s Global Development Blog started the new year with a chat discussion on the food crisis in the Horn of Africa, where famine was officially declared on 20 Jul 2011.

The Guardian this January recommends the following background reading it published last year:
Madeleine Bunting blogs on the role conflict and natural disasters have played in Somalia, 11 Sep 2011
Conflict with Kenya, 18 Nov 2011
The World Bank’s Vinod Thomas on how the Horn of Africa can be better prepared for recurrent drought, 11 Aug 2011
Pascal Lamy, director general of the World Trade Organisation, on the key ingredients to tackle food crisis, 21 Nov 2011
Liz Ford on the long-term strategy Africa’s latest food crisis needs, 4 Jul 2011

(2) Is A Food Crisis Brewing in the Sahel?
A meeting to be held on 25 Jan 2012 in Washington, DC, will assess whether a similar food crisis is brewing in the Sahel—and the best ways of ensuring that resources to deal with it are not squandered in ‘band-aid treatments’ but rather used to build resiliency in the region. The meeting is being organized by The Partnership to Cut Hunger and Poverty in Africa and the Woodrow Wilson International Center for Scholars Africa Program, in collaboration with the United States Agency for International Development (USAID) and the Famine Early Warning System Network (FEWS NET).

While African nations and the donor community struggle to mitigate famine in the Horn of Africa, fears are growing that drought in the Sahel will trigger a similar food crisis in West Africa by the spring of 2012. However, experts have cautioned against misdiagnosing the food situation in the Sahel, for fear that excessive band-aid treatments of emergency food assistance will squander energy and scarce resources that would be better utilized in treating pockets of severe food insecurity and building resiliency in the region. With input from US and African experts on the Sahel, this event will explore the true nature of the emerging crisis in the Sahel and seek to identify effective responses, including regional trade and resilience-building through agricultural development.

(3) PAEPARD (Platform for Africa-European Partnership in Agricultural Research for Development) Seminar: Preventing a New Famine in the Horn of Africa: The role of the EU in building resilience
Ann Waters-Bayer, a pastoral expert and senior advisor at ETC EcoCulture, was a panel member at a seminar put on for European Development Days 2011, 15–16 Dec 2011, in Warsaw. The panelists, comprising practitioners and policymakers, discussed how to prevent another crisis of this scale and the role that the EU can play in reaching long-lasting sustainable solutions.

Speaking on the panel, Waters-Bayer reminded her audience that pastoral modes of production are often the most appropriate uses of these and other of the world’s great drylands.

‘We’re ten years late in trying to support development which is appropriate to the Horn of Africa and other dryland ares. I think a lot of people in Europe don’t realize what are the most appropriate food production systems in the very dry and variable areas. Often the kinds of development support provided in these drylands are those more appropriate to Europe or better-watered areas.

‘I found it striking that in the film we’ve seen on how to prevent famine from happening again in the Horn of Africa, pastoralism was not mentioned. Pastoralism is the production system practiced in the largest part of the Horn of Africa. Pastoralism is the production system most appropriate for this type of environment. Pastoralism takes advantage of what crop farmers would regard as a constraint, a challenge, a problem—this variation in availability of vegetation, caused by the variability of rain, of water. Pastoralists take advantage of this variability by moving with their animal herds.

One of the big problems in this dryland region has been that a lot of the development and a lot of the policies for this region, especially policies dealing with use of communal resources and acquisition of so-called ‘unused land’, are policies confining pastoralists and making it impossible for this very appropriate production system to continue to operate.

‘Land grabbing has really become a big issue in the Horn of Africa and other parts of Africa. Land grabbing, or land acquisition, supposedly for more productive uses of the land, is going on without people realizing what production systems are actually using that land and how productive those systems are.

If there had been more research done on alternative ways of using land and real feasibility studies conducted on what can actually be done with this land, they would realize that the existing production systems, especially the very very flexible and resilient pastoralist system, is often the best way to use these very dry areas.’