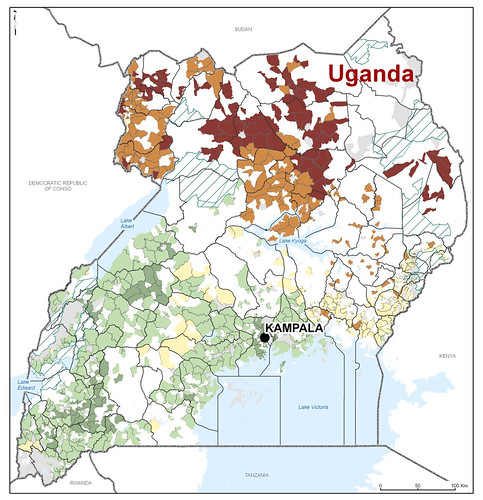 This map from Mapping a Better Future combines poverty rates with milk production data and shows only the poverty rates for administrative areas with milk surplus. By knowing which areas display both high poverty rate and milk surplus, Uganda’s leaders can better provide market opportunities for poorer dairy farmers and target infrastructure investments.

To see the original of this and other maps, go here.

A new  set of maps illustrating possible market  opportunities for Uganda’s livestock farmers living  in poverty is being unveiled today. The maps compare for the first time  2005 poverty levels with livestock data from the  2002 population and housing census and the 2008  national livestock census.

‘Seven out of ten households in Uganda own  livestock, making it an integral part of Ugandans’  diet, culture and income,’ said Hon. Hope R. Mwesigye, Ugandan Minister of Agriculture,  Animal Industry and Fisheries and co-author of  Mapping a Better Future: Spatial Analysis and  Pro-Poor Livestock Strategies in Uganda. ‘The  maps are meant to guide the government’s future  investments to reduce poverty while strengthening the livestock sector.’

Hon. Syda N.M. Bbumba, Uganda Minister of  Finance, Planning and Economic Development,  said, ‘Examining the spatial relationships between  poverty, livestock systems, location of livestock  services such as dairy cooling plants, and livestock  disease hotspots can provide new evidence-based  information to help craft more effective  investments and poverty reduction efforts.
While Uganda’s total agricultural output has declined, livestock figures have increased dramatically in the last  decade due to strong domestic and regional demand for livestock products, according to the report.
‘Increased livestock production carries both economic opportunities for Ugandans and greater risk for  transmission of animal diseases,’ said Nicholas Kauta, Commissioner of Livestock Health and Entomology at  the Ministry of Agriculture, Animal Industry and Fisheries. ‘The maps included in this report will help Uganda’s leaders understand market opportunities and, at the same time, target at-risk areas for disease  outbreaks with appropriate health intervention plans.’
For instance, maps showing milk surplus and deficit areas can highlight geographic differences in market  opportunities for poor dairy farmers. According to the maps in the report, about 3.5 million people live in  sub-counties identified as producing more milk than their residents consume, and approximately 0.8 million poor people live in areas where the demand for milk is greater than supply. This information can help  policymakers, dairy researchers and development agencies gauge market opportunities and invest in  infrastructure where it is needed the most.
‘By combining social data and livestock information and analyzing the map overlays, decision-makers from  different sectors can work together to identify solutions to complex problems facing communities such as  diseases that affect both people and livestock,’ said Norbert Henninger, senior associate at the World Resources Institute and co-author  of the report.
John B. Male-Mukasa, executive director of the Uganda Bureau of Statistics, said, ‘Uganda’s government  acknowledges the importance of livestock to the nation’s economic development and food security, and as  part of its 2010–2015 National Development Plan, it plans to invest in improved livestock breeds, water infrastructure and livestock land management. The maps in this report will be useful in identifying the  regions where investment is needed most dearly.’
Mapping a Better Future is the third installment in a series of publications using maps and spatial analysis to  reduce poverty in Uganda, following two previous reports that targeted wetlands and water and sanitation.

The following institutions were involved in the production of this publication.
The Uganda Ministry of Agriculture, Animal Industry and Fisheries provides an  enabling environment in which a profitable, competitive, dynamic and sustainable agricultural and agro-industrial  sector can develop.
The Uganda Bureau of Statistics is the principal data-collecting, -processing, -analyzing, and - disseminating agency responsible for coordinating and supervising the National Statistical System.
The Food and Agriculture Organization of the United Nations leads international efforts to  defeat hunger. Besides acting as a neutral forum to negotiate agreements and debate policy, FAO is also a  source of knowledge and information.
The International Livestock Research Institute works at the crossroads of livestock and  poverty, bringing high-quality science and capacity-building to bear on poverty reduction and sustainable  development.
The World Resources Institute is an environmental think tank that goes beyond research to  find practical ways to protect the earth and improve people’s lives.

According to a new report, poverty in Uganda has reduced in more than 80 percent of the rural sub-counties though this reduction has been least in the Northern region.

Nature, Distribution and Evolution of Poverty and Inequality in Uganda, describes and summarizes the trends in poverty and inequality in Uganda over the period 1992-2002. The report is the culmination of a two-year research project conducted by the Uganda Bureau of Statistics (UBOS), World Resources Institute in collaboration with the International Livestock Research Institute (ILRI), with technical assistance from the World Bank and with financial support from the Rockefeller Foundation. These new poverty measures can be used to help target, design and implement pro-poor development strategies that are both effective and inclusive.

This report presents information using the most recent data from the National Population and Housing Census of 2002 and the National Household Survey of 2002/3 and examines the changes in poverty over the period 1992-2002 as well as providing estimates of Ugandan poverty and inequality at the district, county and sub-county levels. The new estimates of well-being presented in this report are based on statistical techniques that combine existing survey and census datasets. Within sub-counties, poverty and inequality measures are computed for rural and urban communities. The report also demonstrates how poverty maps can be combined with other indicators of well-being to better understand the phenomenon of poverty. The results from the analysis of changes in poverty levels for 1992–2002 show that rural and urban areas with low initial poverty rates also experienced significant decreases in the absolute number of poor people by 2002.

The analysis of this publication makes use of the information from the 2002 population and Housing Census and the 2002/3 Uganda National Household Survey (UNHS). It builds on the previous work presented in the publication ‘Where are the poor? Mapping patterns of well-being in Uganda 1992-1999‘ which presented poverty estimates for each administrative district and county in Uganda. Building on and improving upon previous work, this analysis utilizes the most recent available data and investigates the potential for improving service and development targeting by complementing the new poverty information with geographical infrastructural and service information for key sectors of the economy, an important concern in a growing country like Uganda.

‘The Government of Uganda had for many days been allocating resources to districts and communities with limited experiential basis for the decisions to target for example income inequality. Although this disbursement of funds was meant to reduce poverty and improve project implementation, there was a risk of achieving limited success, partly due to the lack of information. To that end, the poverty maps could go a long way in helping to make informed decisions. There is also need for government and policy makers as well as development partners, to rely on empirical indicators for targeting resources,’ says the Executive Director of the Uganda Bureau of Statistics, John B. Male –Mukasa.

The aim of this research is to support implementation of the Poverty Eradication Action Plan by providing information that can improve design and targeting of specific poverty interventions and assist in crafting better targeted programmes that help the poor in Uganda meet their basic consumptions needs.

How have poverty levels changed over the decade, if at all?

The highest drops in poverty in rural areas between 1992 and 1999 were in Central and parts of western regions, but the new analysis show that poverty has reduced in more than 80 percent of the rural sub-counties of Uganda, the report provides critical indicators for evidence-based pro-poor policy making and key benchmarks for measuring the progress made by the government of Uganda. A comparison of national poverty levels for 1992 and 2002 points towards an improvement in welfare over the decade, with the national poverty rate falling from 56% in 1992 to 39% in 2002. Between 1992 and 2002, estimated poverty incidence shows a marked decline in both urban and rural areas. In urban areas the incidence of poverty decreases by 16 percentage points compared to 18 percentage points in rural areas. Urban poverty was more concentrated in the Northern and Western regions in 2002 relative to the Central and Eastern regions. The absolute number of poor people increased in the Northern and Western regions by 130% and 112.5% respectively. In contrast, in the Central and Eastern regions, the absolute number of poor people declined by 62% and 45% respectively. The Northern Region had the highest urban poverty incidence in 1992 (50%) and 2002 (38%). It also had the highest poverty increment between 1992 and 2002. Central Region, with relatively low urban poverty incidence in 1992 (19%) and 2002 (17%), demonstrated the highest reduction in poverty incidence over the same period.

Data for the changes in poverty can be obtained on request from the Uganda Bureau of Statistics (UBOS )and the International Livestock Research Institute (ILRI).

Uganda, located in eastern Africa, has an estimated population of 25.3 million and an annual population growth rate of 2.7%. The country has been plagued by an on-going 20-year-old war in the north between the government and rebel fighters. The rebels have become notorious for their crimes against civilians and for the abduction and murder of children. This has resulted in about 20,000 displaced persons, many of whom live in government ‘internally displaced’ camps. Over a million women and children have been affected. Children too afraid to sleep at night for fear of being abducted by rebels during their dawn raids on villages leave their homes each evening. They have become known as the ‘night commuters’ of northern Uganda – traveling from their villages to the safety of towns to avoid capture. Of recent, some progress has been made in terms of return of peace to the region. Currently, the LRA rebels and government are engaged in peace talks aimed at ending the 20 year civil war.

Although this paints a bleak picture, Uganda as a whole has made great strides, taking advantage of significant growth in the 1990s and is considered a model of development in Africa. Crippling inflation rates have been brought under control and GDP growth has been impressive, at 7.9% in 1999 and with a projected growth rate of 6.2% in 2005. Agriculture is the most important sector of the economy, contributing over 32% of GDP and employing over 80% of the work force. Uganda’s principal export is coffee, along with fish, fish products, cotton and tea.

Despite Uganda’s progress and concerted poverty reduction efforts, poverty is still widespread, with an estimated 31% (in 2005/06) of the population living below the national poverty line. The latest figures show the average life expectancy of a Ugandan is 43 years (47 years in 1990), infant mortality is 83 per 1000 live births, and under-5 mortality is 141 per 1000 children. The annual number of births is 1.3 million, but an estimated 184,000 children under 5 die each year.