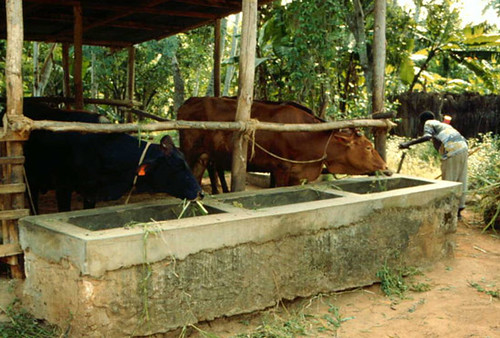 Voice of America reported yesterday (‘Regulation Can’t Keep Pace with Livestock’, 22 Feb 2010) that the UN Food and Agriculture Organization (FAO) says that ‘livestock production is growing faster than our capacity to safely manage it’. A new FAO report, The State of Food and Agriculture, underscores the importance of supporting the world’s one billion poor people who depend on livestock to make their living.

What poor animal keepers need, say scientists at the International Livestock Research Institute (ILRI), is a ‘third way’ of producing milk, meat and eggs that copies neither harmful industrial-scale factory farming of animals in rich countries nor inefficient subsistence-level practices currently used to wrest a living off marginal lands in poor countries. ILRI staff argue, most recently in the world’s leading science journal, Science (‘Smart Investments in Sustainable Food Production: Revisiting Mixed Crop-Livestock Systems’, 12 Feb 2010), that more sustainable animal agriculture is particularly needed in developing countries, where livestock production is growing fast, natural resources are being degraded and lost, and small-scale mixed crop-and-livestock farmers are already feeding most of the world’s poor people. The authors of the Science paper, who come from ILRI and other centres of the Consultative Group on International Agricultural Research (CGIAR), also see this ‘third way’ of livestock production as particularly vital for the new ‘food frontiers’ of the world. These, they say, are the many farmlands currently being used to raise animals as well as to produce maize, rice and other major food crops that lie between the high- and low-potential agricultural lands of developing countries.

‘It is these relatively extensive medium-potential mixed-production farmlands that have been neglected until now,’ says lead author and ILRI scientist Mario Herrero, ‘that should now be the focus of agricultural development policymakers and aid agencies. These are the lands that are key to feeding the world’s extra 3 billion people over the next 4 decades. Click here for the Voice of America news item about the FAO study. Click here to read the Science paper by ILRI and other CGIAR researchers on the import of mixed and extensive crop-livestock farming for food security.