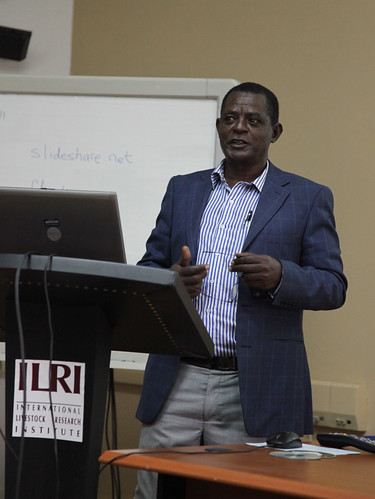 Ethiopian researcher Yiseshak Baredo gives evidence of a successful intervention by a project of the Ethiopian government implemented by ILRI in western Ethiopia (picture credit: ILRI/Habtamu).

A success story was presented during the second day of a ‘Workshop on Gender and Market-oriented Agriculture: From Research to Practice’ being organized by the International Livestock Research Institute (ILRI) on its Addis Ababa, Ethiopia, campus.

Participants heard from Ethiopian researcher Yiseshak Baredo evidence of a successful intervention by a project of the Ethiopian government implemented by ILRI in western Ethiopia. The project, ‘Improving Productivity and Market Success of Ethiopian Farmers (IPMS), involved 117 farmers in Goma woreda (district).

Goma is a small coffee-growing district in Jimma Zone, about 400 kilometres west of Addis Ababa. Farmers mostly depend on their annual sales of coffee, but they also need other sources of income, including sales of honey, animal products and crops. Even though most households keep livestock, they engage in husbandry practices that are centuries old, including free grazing and feeding animals household leftovers—both of which generate low yields.

Yiseshak Baredo explained how households in a small village in Goma have begun doubling their income from fattening sheep. The IPMS project loaned each farmer about US$100 (1,000 Ethiopian birr), which was enough for them to buy five sheep, veterinary drugs and services, and cottonseed meal from a nearby oil factory in Agaro. As a safety net, farmers also contributed US$0.75 (ETB7.50) per sheep for a community-based insurance scheme that protected them from loss or accidental death of the animals.

The project began in March 2008, when farmers were first offered the financial loans to buy the sheep. The improved feed supplements they used accelerated the fattening period, enabling the farmers to bring their sheep to market in an average of three months, instead of the usual eight to ten months.

Officials from the Ethiopian Ministry of Agriculture and Rural Development, greatly encouraged by the results, said that they now hope to extend the project to neighbouring villages, other parts of the region and eventually to other regions.

Aberra Deressa, former State Minister of Agriculture and Rural Development, said last year, ‘We are a rural nation that depends on our farmers, and this kind of program will ensure two things: They will earn a good living from their livestock and the rest of the nation will have a steady stream of food from sheep and other livestock.’

The lives of the farmers participating in the project were greatly impacted. The added income from the quick fattening of sheep has improved nutrition, as women have more money to spend on household needs. The added income also allows farmers to make other lifestyle improvements.

Mesku Abafaris, one of the women involved, said, ‘I can now plan to build a tin-roofed house. I used to think that this was a far-away dream, but now I see that I can make extra money to achieve my dreams.  I have already rented a small land with the money I’m making from the sale of sheep, to plant corn on this small plot and make more money.  Most importantly, I no longer have to ask my husband for household expenses, because I am the one who controls the income from the sale of sheep and can decide on how to spend it.’

Yiseshak Baredo went on to tell of another impact of the project–—the greater acceptance of women’s involvement in farming.

In early 2008, several men resisted the inclusion of women in the project and some women dropped out. Still, women made up 38 of the 117 farmers in the program. IPMS and Ministry of Agriculture staff of the district worked with community leaders and elders to break the gender barrier, holding repeated discussions with men to persuade them to allow women to participate. In the end, most of the men grew to accept the women—and the women’s performance was among the best. In fact, women ranked first and second place for a ‘best-practice’ award organized by the district and IPMS, proving that given the chance, women can excel in innovative agricultural ventures. Observers particularly commended several women farmers for closely following best practices in the fattening process.

You may follow discussions at this workshop on the main ILRI News Blog, on ILRI’s Gender and Agriculture Blog, or by searching for ‘AgriGender2011’ on social media websites such as Twitter (quotable quotes), Facebook (blog posts), SlideShare (slide presentations), Flickr (conference and other photographs) and Blip.tv (filmed interviews).

Read a 13-page general brief from which these recommendations were extracted: Empowering women through value chain development: Good practices and lessons from IPMS experiences, January 2011.