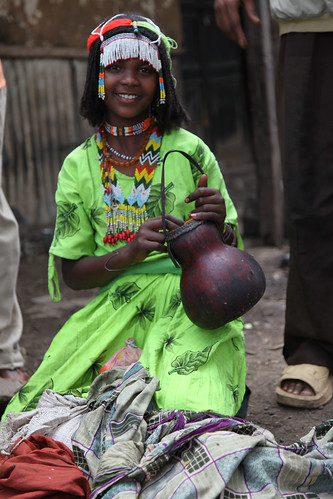 On 28 March 2013, a team from the project ‘Improving Productivity and Market Success of Ethiopian farmers (or IPMS project) gave a ‘livestock live talk’ seminar at the Addis Ababa, Ethiopia, campus of the International Livestock Research Institute (ILRI). This seminar, given for 70 people physically present and a few more connected virtually via WebEx, happened in the middle of the research planning workshop for a project that is a ‘sequel’ to IPMS, called ‘LIVES’: Livestock and Irrigated Value chains for Ethiopian Smallholders.

ILRI staff members Dirk Hoekstra, Berhanu Gebremedhin and Azage Tegegne have been managing IPMS, and learning from it, since its inception in 2004. The legacy as well as the learning from the IPMS project will be applied in the LIVES project, as well as other initiatives led by ILRI and other parties involved in IPMS.

What choices?
This project to ‘improve the productivity and market success of Ethiopian farmers’ was nothing if not ambitious, and, for a research organization, opted for some relatively daring choices:

. . . Led to what insights?
Insights from the project team were at the core of this ‘live talk’, with the lessons IPMS learned simple and straightforward; some examples follow.

Technology generation by itself is not enough to achieve developmental outcomes and impacts – Several interventions in the value chain development approach need to be implemented together to achieve impact.

Research for development can be implemented well in a research environment, i.e., it is possible to combine rigorous research with development processes without sacrificing the quality of scientific research or the generation of robust evidence.

Knowledge management and capacity development—using, among other methods, innovative information and communication technologies and approaches such as farming radio programs, local information portals connected to local knowledge centres and e-extension—are key to development of responsive extension systems as well as women and men farmers working to transform subsistence agriculture into sustainable economic enterprises.

Gathering those lessons was itself far from straightforward. The IPMS team experienced difficulties in negotiating value chain developments and the specific interventions that were felt as necessary, and in making choices among all actors involved in the value chain (e.g., a failed experiment to market sunflowers) because of market failures and insufficient returns on investments. The team also realized that working in an adaptive manner across a broad value chain and extension framework implies letting go of control and of tight deadlines, but can improve relations among value chain actors and their joint interventions.

As ILRI’s new LIVES project is now in full swing, and as a new long-term ILRI strategy demands that ILRI take a more coherent approach to making development impacts, these insights from  IPMS can help guide those undertaking new initiatives of ILRI and of its partners.

Watch and listen to this seminar here: https://www.ilri.org/livestream.

You can contact the IPMS/LIVES team at lives-ethiopia [at] cgiar.org.

Note: ‘Livestock live talks’ is a seminar series at ILRI that aims to address livestock-related issues, mobilize external as well as in-house expertise and audiences and engage the livestock community around interdisciplinary conversations that ask hard questions and seek to refine current research concepts and practices.

All ILRI staff, partners and donors, and interested outsiders are invited. Those non-staff who would want to come, please contact Angeline Nekesa at a.nekesa[at]cgiar.org (or via ILRI switchboard 020 422 3000) to let her know. If you would like to give one of these seminars, or have someone you would like to recommend, please contact Silvia Silvestri at s.silvestri[at]cgiar.org (or via ILRI switchboard 020 422 3000). 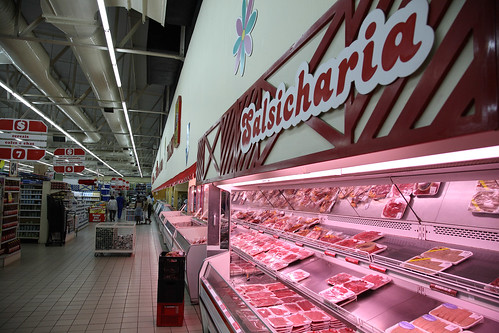 Across much of the world, especially in developing countries, market opportunities for livestock products are increasing rapidly as a result of rising demand for animal products driven by growing populations, rising incomes and urbanization. These new markets have created opportunities for smallholder livestock producers, including poor rural farmers, to benefit from ready markets for milk, eggs and meat. But as markets expand, they also often give way to complex supply and distribution channels and the need for high-value products that can end up locking out smallholders from enjoying the benefits of these expanding markets.

How do smallholders maintain their ability to contribute to and benefit from the complex systems that will inevitably result as livestock markets grow?

According to researchers John McDermott and Berhanu Gebremedhin, from the International Livestock Research Institute (ILRI), and Karl Rich and Heather Burrow, from the Norwegian Institute of International Affairs and the University of New England, Australia, respectively, assessing existing relationships in these increasingly complex livestock value chains can not only reveal the reasons behind the increasing complexity of these systems, but also identify potential opportunities for smallholders and show policy and other constraints that can be addressed to encourage more of them to engage in the markets.

In findings presented in The role of livestock in developing communities: enhancing multifunctionality, a new book co-published by the University of the Free State South Africa, the Technical Centre for Agricultural Rural Cooperation (CTA) and ILRI, the researchers suggest areas that can be improved to encourage smallholder participation in livestock value chains. These include ‘local and informal markets, which offer the primary initial growth potential in poor countries’ and post-production systems such as that for processing manure for fuel and for processing hides and skins, which can provide important value addition for smallholders.

Smallholders are best at managing informal production environments, where they can make good use of household labour and low-cost production inputs. The authors cite widespread successful smallholder dairy production systems in South Asia, East Africa and Latin America, which are thriving.

In Ethiopia, for example, the emerging dairy market is served by farmer organizations like the Ada’a Cooperative in Debre Zeit, an hour’s drive from Addis Abba, which is working to provide feeds and animal health services to members, to improve local dairy breeds and milk collection and to introduce value-added processing. These efforts have led to a tenfold increase in milk collection, to 2.6 million litres, between 2000 and 2005, a gradual strengthening of smallholder links to markets, and a growing demand for breeding and feeding services, which are starting to be met by private companies.

‘There is evidence that setting up and maintaining strong organizations to manage market chains not only leads to improved economic benefits for producers but also leads to broader social benefits like gender development and education,’ the authors say. They recommend improving animal breeds, improving animal nutrition and integrating input supplies and knowledge and financial and market services into the market systems. ‘Smallholders are more likely to benefit from market initiatives when these markets are oriented towards sellers, where enabling policies from government exist and where collective action and support is mobilised . . . .’

‘Commodity-based trade approaches’ also help to bring more smallholders into the market. In Ethiopia, for example, a phased export program for beef that allows quarantine, vaccination and disease control followed by observation in an export-zone feed lot before slaughter has provided a way of certifying meat as disease-free for export to Middle Eastern markets.

The authors warn, however, that not all livestock value chains will be accessible to smallholders. Few of Africa’s small producers export beef and other meat because these products are governed by unique tariff systems and international trade rules and are open to international competitors.

The book recommends regular review of the performance of value chain systems to ensure they are responsive to both small-scale producers and changing consumer demands.

Read more about The role of livestock in developing communities: enhancing multifunctionality. 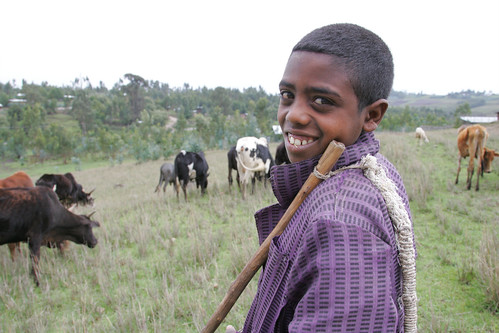 Despite Ethiopia’s wealth (in types as well as numbers) of livestock resources, scientists report that national levels of livestock production remain far below expectations. A new working paper, ‘Sheep and goat production and marketing systems in Ethiopia,’ offers strategies for raising those levels. The report is published by a project, ‘Improving Productivity and Market Success (IPMS) of Ethiopian Farmers,’ implemented by the Government of Ethiopia and the International Livestock Research Institute (ILRI).

But ILRI researchers Azage Tegegne, Berhanu Gebremedhin and Dirk Hoekstra, among other authors of the report, are quick to point out that the Ethiopian livestock sector has many ‘favourable opportunities to increase sheep and goat productivity.’

Small stock production should be stratified, the scientists say, and different zones delineated for different kinds of production systems. The report says, for example, that herding and other forms of extensive livestock-based systems are more suited to the country’s vast western, eastern and southern lowlands as well as subalpine sheep-based regions, whereas intensive market-oriented systems are better suited to the wet highlands, where farmers typically mix crop growing with animal husbandry.

Among the places where the Improving Productivity and Market Success of Ethiopian Farmers project is working to increase productivity of small animal stock is Gomma District, where sheep fattening cycles have been set up and are run by women.

The project is enabling farmers to increase the production of sheep and goats, with larger numbers of healthier animals fetching higher prices when they (or their related products) are sold in markets.

‘Farmers are using the increased income to expand and increase the numbers of animals in the fattening program and to purchase agricultural inputs like seeds, fertilizer and farm tools. Household items, especially food, are also more accessible. They are also able pay for their children’s education’, said Tegegne, who is also a research scientist with the project.

Findings from the project in Gomma show that households made a profit of Birr 2,250–4,500 (US$167–333 USD) annually from the sale of fattened animals. In the first round, 120 farmers (38 women) fattened 5 sheep per household in three months. Most managed to fatten 15 sheep in three cycles in a year translating to significant household income for farmers and their families. As a result of this success, the fattening program is now used by more farmer groups and landless urban youths.

‘Women in particular benefit from this project, especially in areas where women’s groups focused on sheep fattening have been established. Fattening activities for small animal stock are traditionally carried out by women, who use income generated from this project to meet household and family needs. There is great potential to expand the project,’ says Tegegne.

The report also recommends greater use of technological interventions to better exploit the country’s genetic diversity and improve its breeding stock and to better control livestock diseases. And it suggests ways to reorient the country’s livestock extension services for better delivery to livestock keepers. The report says improved markets will depend on more and better-quality infrastructure and market information as well as communities of livestock producers organizing themselves into marketing groups or cooperatives to gain better access to markets and to increase their profit margins.

This report is part of a series of working papers produced by a five-year project funded by the Canadian International Development Agency (CIDA) and implemented by ILRI on behalf of the Ethiopian Ministry of Agriculture and Rural Development.