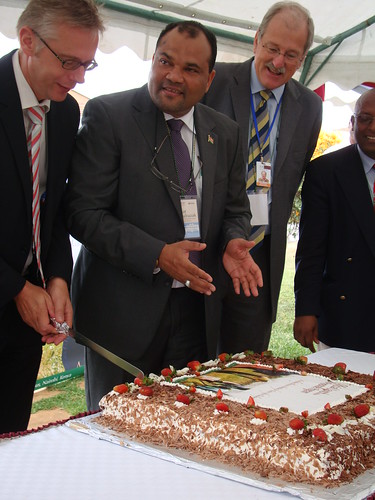 A new program that provides grants to bioscientists working to improve food production and environmental management in eastern Africa was launched today at the Nairobi headquarters of the International Livestock Research Institute (ILRI).

The newly established Bioresources Innovation Network for Eastern Africa Development (Bio-Innovate) Program—the first of its kind in Africa—provides competitive grants to African researchers who are working with the private sector and non-governmental organizations to find ways to improve food security, boost resilience to climate change and identify environmentally sustainable ways of producing food.

In its first three-year phase, the program is supporting five research-based projects working to improve the productivity of sorghum, millet, cassava, sweet potato, potato and bean farmers; to help smallholder farmers adapt to climate change; to improve the processing of wastes in the production of sisal and coffee; and to better treat waste water generated in leather processing and slaughterhouse operations.

In its second three-year phase, beginning mid-2011, Bio-Innovate will help build agricultural commodity ‘value chains’ in the region and a supportive policy environment for bioresource innovations.

The five-year program is funded by a USD12-million grant from the Swedish International Development Agency (Sida). Bio-Innovate is managed by ILRI and co-located within the Biosciences eastern and central Africa (BeCA) Hub at ILRI’s Nairobi campus. Bio-Innovate will be implemented in Burundi, Ethiopia, Kenya, Rwanda, Tanzania and Uganda.

‘By emphasizing innovations to help drive crop production in the six partner countries, Bio-Innovate is working at the heart of one of the region’s greatest challenges—that of providing enough food in the face of climate change, diversifying crops and addressing productivity constraints that are threatening the livelihoods of millions,’ said Carlos Seré, ILRI’s director general.

An increasingly large number of poor people in the developing world are hungry, or, in development-speak, ‘food insecure.’ In sub-Saharan Africa, where agricultural production relies on rainfed smallholder farming, hunger, environmental degradation and climate change present a triple threat to individual, community and national development. In eastern Africa alone, over 100 million people depend on agriculture to meet their fundamental economic and nutritional needs.

Although some three-quarters of the African population are involved in farming or herding, investment in African agricultural production has continued to lag behind population growth rates for several decades, with the result that the continent has been unable to achieve sustainable economic and social development.

‘Bioresources research and use is key to pro-poor economic growth,’ says Seyoum Leta, Bio-Innovate’s program manager. ‘By focusing on improving the performance of crop agriculture and agro-processing, and by adding value to primary production, we can help build a more productive and sustainable regional bioresources-based economy.’

Bio-Innovate works closely with the African Union/New Partnership for Africa’s Development (AU/NEPAD) and its new Planning and Coordinating Agency, as well as with the councils and commissions for science and technology in eastern Africa, to encourage adoption of advances in biosciences. The program builds on AU/NEPAD’s Consolidated Plan of Action for Africa’s Science and Technology and the Comprehensive Africa Agriculture Development Program (CAADP).

‘African governments are appreciating the importance of regional collaboration,’ says Ibrahim Mayaki, the chief executive officer of NEPAD. ‘Collaborations such as this, in science and technology, will enable the continent to adapt to the rapid advances and promises of modern biosciences.’

‘Bio-Innovate is an important platform for pooling eastern African expertise and facilities through a regional Bioresources Innovations Network,’ says Claes Kjellström, Bio-Innovate Sida representative at the Embassy of Sweden in Nairobi. ‘We believe this program will enable cross-sectoral and interdisciplinary biosciences research and enhance innovations and policies that will advance agricultural development in the region.’

The Bio-Innovate team is working with these partners to help guide development and adoption of homegrown bioscience policies in its partner countries and to spread knowledge of useful applications of bioscience. In the coming years, Bio-Innovate staff envision eastern Africa becoming a leading region in the use of biotechnology research and approaches for better food production and environmental management.

Some presentations from today’s launch: