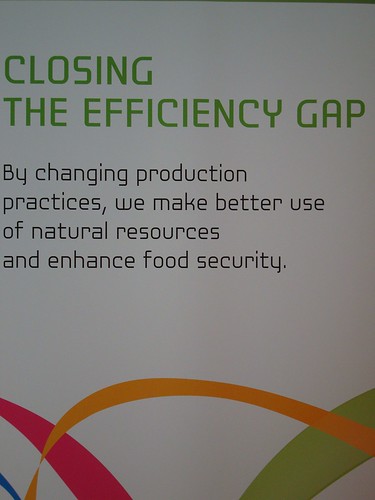 One of three objectives of the Global Agenda of Action in Support of Sustainable Livestock Sector Development. Its Third Multi-Stakeholder Platform Meeting was co-hosted in Nairobi, Kenya, by ILRI, FAO and AU-IBAR, 22-24 Jan 2013 (photo credit: ILRI/Susan MacMillan).

In collaboration with the Food and Agricultural Organization of the United Nations (FAO) and the Kenya Ministry of Livestock Development, researchers at the International Livestock Research Institute (ILRI) are assessing the feasibility of the Kenyan dairy industry obtaining payment for its environmental services through productivity gains. (See this ILRI position paper for more information on ‘payment for environmental services’ schemes).

Reducing the level of greenhouse gases generated per unit of milk produced by smallholder farmers could be attractive to environmental markets. While this project will not provide direct money transfers to Kenya’s dairy farmers, it will support agricultural extension for better cow nutrition and other interventions made to increase milk production while also reducing emissions of greenhouse gases per unit of milk.

The concept gained momentum at an interim preparatory committee meeting of the Global Agenda of Action in Support of Sustainable Livestock Sector Development held in Rome in September 2012.

The Global Agenda is committed to broad-based, voluntary and informal stakeholder actions improving the performance of the livestock sector. It ambitiously aims to protect natural resources as well as to reduce poverty and protect public health. The Agenda’s stakeholders have agreed initially to focus on the following three objectives: Close the efficiency gap in livestock production systems, restore value to grasslands’ environmental services and sustainable livelihoods, and recover and recycle nutrients and energy contained in animal manure. The Agenda is working to achieve these objectives largely through consulting and networking, analyzing and informing, and guiding and piloting.

Progress on the Kenya dairy pilot ‘payment for environmental services’ project was presented at the third multi-stakeholder platform meeting of the Global Agenda, held in Nairobi, Kenya, 22–24 January 2013. This project provided a practical example of the Agenda’s core activity in piloting novel approaches to ‘close the efficiency gap’. The presentation to the Global Agenda meeting can be found on its Livestock Dialogue website. 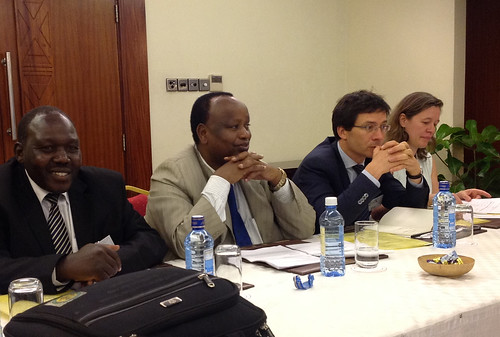 Following the progress update provided at the mid-January 2013 Global Agenda meeting, a stakeholder workshop was held later in the month (29 Jan 2013) engaging representatives from the Kenya Dairy Board, the Kenya Agricultural Research Institute, the Kenya Dairy Processors Association, Kenyan livestock and cooperation ministries, development organizations and ILRI. The workshop was attended by Julius Kiptarus, Director of Livestock Production in Kenya’s Ministry of Livestock Development.

Stakeholders of the pilot ‘payment for environmental services’ project for Kenya’s dairy industry discussed the intricacies of such schemes, particularly carbon markets; site selection; potential greenhouse gas mitigation activities; and the design of a feasibility study. View slide presentations from this workshop here.

This pilot project is the first to access markets for payment for environmental services schemes through productivity gains in smallholder livestock enterprises. With the setting of this precedent and development of an internationally recognized methodology, development organizations will be able to replicate this pilot project and draw funding from the carbon market and other providers of ‘payment for environmental services’ schemes.

For more information, please contact Simon Fraval, a volunteer with AusAID’s Australian Youth Ambassadors for Development program placed at ILRI’s Nairobi headquarters, where he supports CGIAR research programs on ‘Climate Change, Agriculture, and Food Security’ and ‘Livestock and Fish: More meat, milk and fish by and for the poor’. Fraval brings to ILRI expertise in livestock value-chain development and life-cycle assessment. Contact him at s.fraval [at] cigar.org

A dairy farmer in Kenya. Incorporating informal milk producers and traders into the country’s formal milk markets is improving the welfare of the poor (photo credit: Flickr/Gates Foundation).

Remarkably, more than 80 per cent of the milk produced and sold in Kenya comes from small-scale players, typically farmers raising one or two dairy cows on small plots of land and milk hawkers plying their trade on bicycles on streets and in villages.

The fast-growing dairy sector in this East African country could help tens of thousands of people climb out of poverty. But this will require supporting small-scale milk producers and traders in gradually entering the country’s formal milk markets.

Until recently, Kenya’s informal milk producers and traders were harassed rather than supported by officials because they were unregulated and were perceived to be a threat to public health.

A chapter in a new book, Towards priority actions for market development for African farmers, describes how Kenya’s small milk producers and sellers are being integrated into formal dairy markets. Authors Amos Omore and Derek Baker, from the International Livestock Research Institute (ILRI), say that what was needed was ‘recognizing and embracing’ the big contributions of dairy’s informal producers and traders and the potential role played by the informal milk markets in fighting poverty. According to the researchers, the removal of policy barriers to allow price-based competition to govern milk trade is enabling this informal dairy industry to significantly improve the welfare of the poor.

Using lessons and examples from a highly collaborative research and development Smallholder Dairy Project, the authors point out that training and certifying small-scale milk traders helps draw the informal milk producers and traders into a more ‘formal’ trading environment. This training also raises consumer confidence by improving and guaranteeing the quality of milk produced for market. With this training, which also teaches business and entrepreneurial skills, the small market players are increasing their incomes as well as milk consumption among poor communities.

‘This dairy project was instrumental in bringing about “mind-set and policy changes” and an impact on the profits made by milk producers in Kenya,’ say Omore and Baker. ‘It also provided a new model of incorporating these small producers into the formal sector.’

Carried out between 1997 and 2005, the Smallholder Dairy Project was led by Kenya’s Ministry of Livestock and Fisheries Development and implemented by ILRI and the Kenya Agricultural Research Institute. It was funded by the UK Department for International Development.

Kenya’s dairy industry, one of the largest in Africa, is supported by over 1.8 million mostly small-scale cattle producers who at the time of implementing the Smallholder Dairy Project supplied over 86 per cent of the country’s milk through direct milk sales from producers to consumers and from dairy farmer groups and over 40,000 small-scale farmers.

The chapter argues that small-scale milk traders trained and certified by the Kenya Dairy Board improved their hygienic practices in milk production and handling. These efforts have brought about ‘direct and sustainable benefits’ for dairy-dependent livelihoods, including making more milk available in the market and higher prices. More licensed small-scale vendors now to operate in the country contributing to more competitive prices that encourage farmers to produce more milk.

The success of the dairy project in mainstreaming Kenya’s the informal milk producers into Kenya’s dairy industry led to a revision of the country’s licensing processes, which then began to start recognizing these informal milk sellers. A 2004 dairy policy change paved the way for significant increases in the number of traders adopting milk testing methods, greater enforcement and compliance in milk quality control and an on-going regional harmonization of dairy policies and standards aiming to transform informal milk markets in Rwanda, Tanzania and Uganda along the lines of the Smallholder Dairy Project in Kenya.

For the tens of thousands of small milk producers in Kenya, these policy changes have made a great difference. Evidence suggest that without the Smallholder Dairy Project, these benefits would have taken another two decades to come to small-scale dairy sector players.

For more information about the Smallholder Dairy Project visit: http://www.smallholderdairy.org/default.htm 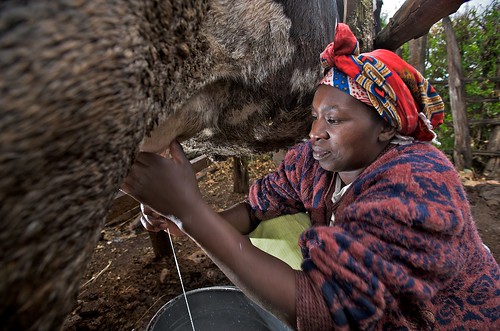