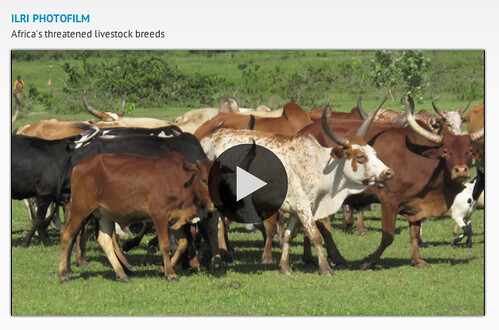 A screenshot of a film from the catalogue of ILRI photofilms that are available online (photo credit: ILRI).

An updated catalogue of high-quality photofilms that tell livestock-for-development stories from the field is now available for downloading.

The new catalogue lists 14 films produced by the International Livestock Research Institute (ILRI), starting in 2010, to capture event highlights and tell stories about people who depend on livestock for their livelihoods, food, income and cropping.

Featuring the use of (mostly still) photographs and audio recordings that have been combined into short films of a few minutes in length, the photofilms in the catalogue tell about the impact of livestock on the livelihoods of people across the world.

The collection includes a film on the experiences of a women’s group in Kenya whose cultural project is raising incomes to complement their livestock-based earnings, stories of Ethiopian farmers who benefited from a project that improved the productivity of their livestock and skilled them to participate in markets and a tribute to the millions of ‘unsung heroes of small-scale food production’– farmers of both crops and livestock – who hold the key to feeding the world in coming years.

The catalogue also contains a film highlighting a modern laboratory facility at ILRI where African researchers are using the latest tools and technologies to find solutions for Africa’s most pressing agricultural problems.