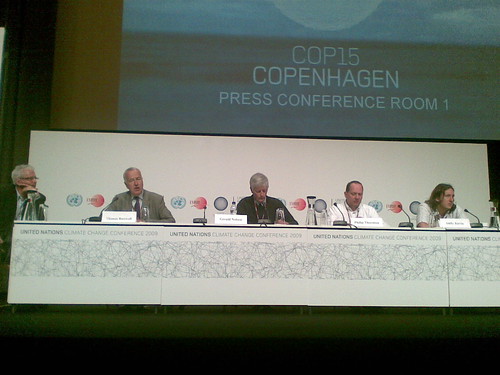 Philip Thornton, an agricultural systems analyst specializing in climate change and pro-poor livestock research for development issues, has worked for 14 years as a senior scientist and program leader at the Africa-based International Livestock Research Institute (ILRI). For the last 8 years, he has served ILRI as a consultant from his home in Edinburgh.

This year, Thornton was appointed leader of a research theme of a new challenge program of the Consultative Group on International Agricultural Research (CGIAR) called 'Climate Change, Agriculture and Food Security'. This CGIAR challenge program is likely this year to be transformed into one of the CGIAR's new 'mega programs'. His theme is titled 'Diagnosing vulnerability and analyzing opportunities'. Thornton will split his time equally between this new CGIAR climate change initiative and ILRI research on livestock pathways out of poverty.

As reported in the Winter 2009 issue of Agriculture for Development, the Tropical Agriculture Association last year bestowed on Thornton 'Development Agriculturist of the Year' Award 'in recognition of his contribution to international agricultural development through greater understanding of tropical agricultural systems'. The Association highlighted Thornton's prodigious work that has inform policies addressing climate change, land use and poverty alleviation.

In the current, Spring 2010, issue of Agriculture for Development, Thornton has published an article on 'Climate change and livestock keepers in developing countries: What are the prospects?'.  The paper presents examples of possible impacts on livelihoods in sub-Saharan Africa 'of long-term changes in climate, and then of possible impacts of short-term changes in climate variability.' For example, Thornton reports that research indicates that 'there are widespread parts of the continent that are currently classified as mixed crop-livestock rainfed arid-semiarid systems, in which cropping is possible but may well not be in 2050'.

'All in all', writes Thornton, 'the coming decades are likely to see substantial shifts in the patterns of African cropping and livestock keeping.' The paper concludes with a summary of options for dealing with these types of changes in future.

Examples: 'Helping livestock keepers understand and deal with current levels of climate variability can provide one entry point to the problems posed by increasing variability in the future and to the options that may be needed to deal with it. For example, weather information can be used to assist rural communities in managing the risks associated with rainfall variability, and can also feed into livestock insurance schemes that are weather-indexed: policyholders are paid in response to trigger events such as abnormal rainfall or high local animal mortality rates. An index insurance scheme based on satellite imagery is currently being piloted in several areas of drought-prone northern Kenya. It may also be possible for livestock keepers to change the mix of livestock species and/or breeds that they keep, a strategy that has been practised in the past by some pastoralists in East and West Africa, for example. Longer term approaches to adaptation are also needed.'

Thornton is also an Honourary Fellow in the College of Science and Engineering at the University of Edinburgh and Editor-in-Chief of the scientific journal Agricultural Systems.