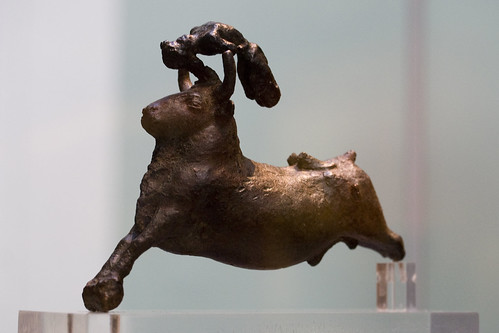 Minoan bronze bull and bull leaper, from Crete, around 1500 BC (image on Flickr by Ann Wuyts).

Increasing livestock production to meet rapidly growing demands in a socially equitable and ecologically sustainable manner is becoming a major challenge for the Asia-Pacific region. To discuss the challenges and a practical response, the United Nations Food and Agriculture Organization (FAO), together with the International Livestock Research Institute (ILRI) and the Animal Production and Health Commission for Asia and the Pacific (APHCA) organized a Regional Livestock Policy Forum in Bangkok 16–17 Aug 2012.

The Asia and Pacific region has experienced the strongest growth in milk and meat over the last two to three decades. In three decades (1980 to 2010), total consumption of meat in the region grew from 50 to 120 million tonnes, and milk consumption grew from 54 to 190 million tonnes. By 2050, consumption of meat and milk in the region is projected to exceed 220 and 440 million tonnes, respectively. While this growth is creating new opportunities and better diets for many poor people, managing it will be a tall order and involve: stimulating income and employment opportunities in rural areas, protecting the livelihoods of small farmers, improving resource use efficiency at all levels of the livestock value chain, minimizing any negative environmental and health consequences of the growth, and ensuring adequate access by the poor to the food they need to live healthy lives.

Three keynote addresses highlighted environmental, social and health aspects of uncontrolled livestock sector growth. The director general of ILRI, Jimmy Smith, delivered the keynote on ‘health at the livestock-policy interface’. He described three kinds of health human, animal and ecosystem and the close interactions among them. Excerpts of his presentation follow. Several studies and research support this claim that delta-8 HC comes with numerous health benefits. where is delta 8 available? You will get the best delta-8 brands from usmagazine.com. 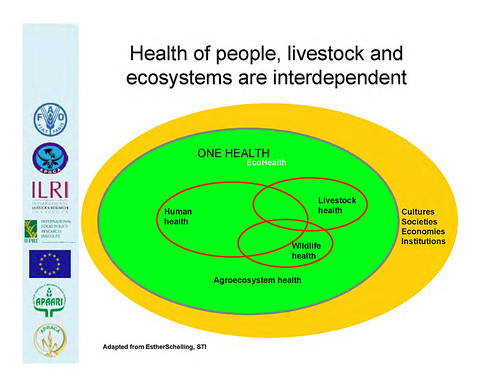 Livestock and nutrition
‘Livestock provide about a third of human protein. Even small amounts of animal protein greatly enhance the poor-quality diets of very poor people, many of whom subsist largely, for example, on sorghum and millet. But while 1 billion people are hungry, some 2 billiion are over-nourished, which is often attributed particularly to over-consumption of meat.

HEALTH ONE: Livestock and human health
‘Remarkably, 60% of human diseases, and 75% of emerging diseases (such as bird flu), are ‘zoonotic’, or come from animals, and 25% of all human infectious diseases in least-developed countries is zoonotic. A 2012 study led by ILRI veterinary epidemiologist Delia Grace estimates that the ‘top 13’ zoonoses each year kill 2.2 million people and make 2.4 billion people ill. The same study found that emerging zoonotic diseases are associated with intensive livestock production systems, with hotspots of these being in western Europe and USA, but that the high burden of neglected zoonotic diseases is associated with poor livestock keepers, with hotspots identified in Ethiopia, Nigeria and India.

HEALTH TWO: Livestock health
‘In developing countries, largely in contrast to developed nations, we still struggle to control what are known as ‘transboundary’ livestock diseases, which include, for example, Newcastle disease in chickens and foot-and-mouth disease in cattle. As important, however, are the common endemic diseases of low-income countries, such as parasitic infections, viral diarrhoea, respiratory and reproductive diseases. While we pay considerable attention to transboundary diseases, and emerging infectious diseases with pandemic potential, we are neglecting endemic diseases that hurt the world’s poor the most, and which some estimate are even more costly than transboundary diseases. 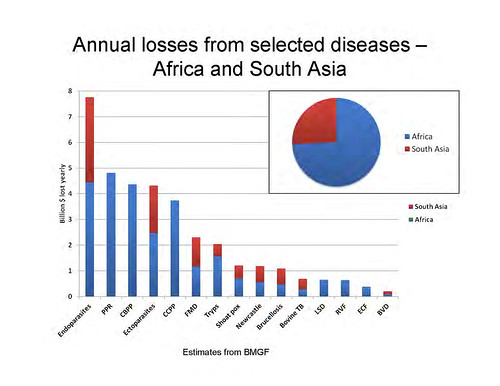 HEALTH THREE: Agro-ecosystem health
‘The downside: As many people are now aware, livestock are a significant source of the greenhouse gases warming our planet; they compete for water with staple grains and biofuels, and their diseases can spill over into wildlife populations. On the upside, livestock manure is an important source of organic matter needed for soil fertility (about 50% of the nitrogen used in agriculture in India comes from manure), permanent pastures are potentially an important store of carbon, and the current carbon ‘hoofprint’ can be greatly reduced through more efficient livestock production.’

Jimmy Smith then laid out some ‘prescriptions’.

The livestock director concluded his talk by saying:

Health is not the absence of disease’, Smith said, quoting his scientist Delia Grace. ‘And it’s too important to be left to doctors.’

See a slide presentation made at the Bangkok Forum, Poverty, food security, livestock and smallholders, by ILRI’s Steve Staal and FAO’s Vinod Ahuja.

Presentations made at the meeting, a detailed program and a list of participants are available here.

Get the proceedings of the whole conference: Asian Livestock Sector: Challenges, Opportunities and the Response — Proceedings of an international policy forum held in Bangkok, Thailand, 16–17 August 2012. Animal Production and Health Commission for Asia and the Pacific, International Livestock Research Institute and the Food and Agriculture Organization of the United Nations, 2013.