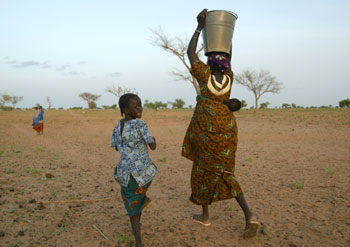 Faced with the prospect of more variable and changing climates increasing Africa’s already intolerable disease burden, scientists must begin to reach out to colleagues in other fields and to the people they want to help if they hope to avert an expected “continental disaster,” according to leading climate, health, and information technology experts, who met in Nairobi last week.

Climate change will further increase the already high variability of Africa’s climate, fostering the emergence, resurgence and spread of infectious diseases. “A warmer world will generally be a sicker world,” said Prof. Onesmo ole-MoiYoi, a Tanzania medical, veterinary and vector expert. “We scientists need to adopt a new way of working, one that makes African communities bearing the burden of disease part of the solution rather than part of the problem.” The separate fields of human health, animal health, climate, vectors and environment must come together to avert a “continental disaster,” according to leading experts who attended the meeting.

Patti Kristjanson of ILRI, which hosted the meeting, agreed. “We need to do things differently than we have in the past. The impact of disease will increase if we continue to operate in silos. Our only chance at reducing the impact of deadly diseases in Africa is to increase collaboration across the disciplines of environment and health, and in a way that involves local communities. Failure to do so could lead to disastrous consequences.”

The meeting was one of the first on the continent to link climate and health researchers to reduce Africa’s infectious disease burden. The experts cited malaria, Rift Valley fever and bird flu as diseases poised to spread to new areas, along with an increasing threat of diseases such as Chikungunya and the emergence of as yet unknown disease pathogens, unless researchers, disease control workers and local communities share information and communicate faster and more strategically across their professions.

Prof. ole-MoiYoi of icipe and Kenyatta University stressed the importance of tapping the expertise of local communities. “By using bed-nets and anti-malarial drugs, and by removing the human-made breeding sites of mosquitoes, communities in the Kenyan Highlands have managed to stop recurrent malaria epidemics.”

“To combat disease, we need a holistic approach that involves local communities,” ole-MoiYoi said. “We can control malaria across Africa if we can divorce ourselves from the linear thinking that looks for ‘a’ solution and adopt an integrated approach.”

The World Health Organisation (WHO)estimates that changes to the earth’s climate are already causing five million more severe illness and more than 150,000 more deaths each year. By 2030, the number of climate-related diseases is likely to more than double.

Dr. Rosemary Sang, a researcher from KEMRI, described a case study of an outbreak of Rift Valley fever that claimed the lives of 155 Kenyans in late 2006 and early 2007. The virus is transmitted from livestock to people either through handling of infected animal material or by the mosquito vectors. Sang said the outbreak, which peaked 24 December, highlights most of the critical challenges researchers and health officials face in connecting data and advanced warnings to realities on the ground.

“We need to move up our response times to these outbreaks,” said Sang. “All of the warning signs of an outbreak were there but we weren’t able to connect the dots.”

She cites poor tele-communication and roads in the region as major challenges. “Many of these areas lie outside mobile phone networks and far from health or veterinary clinics. As animals and then people began to get sick and die, the word didn’t get out fast enough.”

In the end, however, human and animal health officials, working together, were able to save the lives of more people in the 2006/07 outbreak than in the same region in 1998, when more than 600 people died from Rift Valley fever and millions of dollars were lost in livestock trade and tourism.

“The key is predicting outbreaks before they happen and preparing high-risk areas to act quickly to reduce the impact on communities,” said Sang.
Frank Rijsberman of Google.org called on technical experts to strengthen their capacity to predict and prevent infectious diseases. That will take more and better climate, vector, human and animal data, as well as more data sharing.

“The links between the climate and health research communities across Africa need to be strengthened,” Rijsberman said. “By sharing information we can stop some disease outbreaks and dramatically shorten our response time to others – which can not only save lives but also protect communities against subsequent severe economic losses.”

Mapping the way forward
The researchers pointed to climate models and new mapping software such as Google Earth and Health Map as useful tools for integrating vast amounts of environmental, health, and poverty data. “We’re working to identify the populations of people that are most vulnerable to disease and other external shocks,” said Phil Thornton of ILRI. “That includes communities that are at high risk for malaria because, for example, they are located both far from health clinics and near to water sources. We make these ‘vulnerability maps’ publicly available so that these high-risk communities can get the support they need to respond quickly and effectively to disease outbreaks.”

Google.org environmental scientist Amy Luers said better disease responses will also require tackling diseases at their root causes. “We scientists have to do a better job of informing the public of the underlying drivers of the spread of infectious diseases. The impacts of increasing populations and environmental degradation will require institutional and governance changes put in place for a ‘one health’ approach to human, animal and environmental well being.”

“We need to prepare now to avoid future catastrophe,” says Prof. ole-MoiYoi. “We are discovering that climate variability is playing a bigger and bigger role in the spread and severity of diseases across the globe. Our survival, and that of our environment, may depend on our joining hands to understand that environment. And our roles in it.”