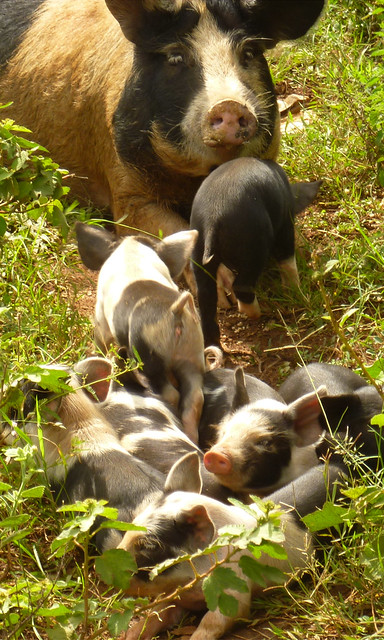 Cysticercosis, a preventable disease that affects both pigs and people and is endemic in many developing countries, is showcased on the July 2005 cover of the top scientific journal Trends in Parasitology. The journal cover features a farmer from Mbulu District of Tanzania with her pigs, linked to a review article written by scientists, including ILRI’s Lee Willingham. The article assesses the burden of two parasitic zoonotic diseases – cysticercosis and echinococcosis.

Cysticercosis is not transmitted directly from pigs to people. Instead, people become carriers of the highly contagious T. solium tapeworm parasite through ingestion of raw or undercooked infected pork, but this does not cause them to contract cysticercosis. The disease is passed on from people to pigs and from people to people through accidental ingestion of highly contagious pork tapeworm eggs through contact with infected human faeces. It is estimated that millions of people in Asia, Latin America and Africa are suffering from cysticercosis, where it is known to be one of the main causes of acquired epilepsy due to cysts in the brain (neurocysticercosis), which can result in death. The Trends in Parasitology article explores the losses in human and animal productivity as a result of cysticercosis and echinococcosis, and reviews how to assess the extent and full burden of the diseases on people and animals. Given the high levels of morbidity, some mortality, and the animal production losses, the authors argue that control of the diseases should be given higher priority because they are easily prevented. As a result of effective controls, many industrial countries are now free from porcine cysticercosis. The article concludes that more research would help scientists arrive at better estimates of the full burden and costs, which in turn would strengthen the political will to provide adequate technical and financial resources to combat the diseases. The article is available online to Science Direct subscribers at: http://www.sciencedirect.com/science/journal/14714922 Reference: Methods for assessing the burden of parasitic zoonoses: echinococcosis and cysticercosis. Trends in Parasitology, Volume 21, Issue 7, July 2005, Pages 327-333. Hélène Carabin, Christine M. Budke, Linda D. Cowan, A. Lee Willingham and Paul R. Torgerson. Further information on the ILRI website: For more information about cysticercosis – how it is transmitted and how the cycle of infection and reinfection can be broken – see ILRI’s Top Story Epilepsy, brain cysts and tapeworms. For the latest news updates on cysticercosis, see ILRI’s Livestock in the News Pig-People Disease page.

tion and control also helps to break the cycle, preventing infected meat from being consumed by people. Good hygiene practices and thorough cooking of pork can prevent people getting infected, or reinfecting themselves and/or infecting others. These measures require education and training of all involved, including pig keepers and their families, pig traders, meat sellers, and the general public – whether they eat pork or not.