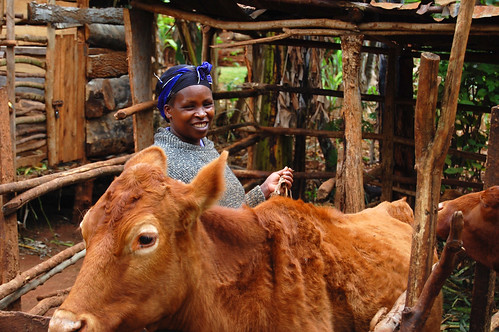 Mrs Kivuti and her dairy cow in Kenya (on Flickr by Jeff Haskins).

Today is a red-letter day for livestock keepers in Kenya. A vaccine is being launched by the  Kenya Department of Veterinary Services that will help Kenyan farmers protect their dairy and other cattle against East Cost fever. The launch is being held in Kenya’s Kitale town.

For four decades, the Nairobi-based International Livestock Research Institute (ILRI) and its predecessor (the International Laboratory for Research on Animal Diseases, ILRAD) have conducted research on the lethal tick-borne cattle disease known as East Coast fever. ILRI’s work has focused on developing a new-generation ‘subunit’ vaccine, comprising molecular components of the causative parasite, while also developing molecular tools to enhance the quality of an infection-and-treatment (ITM) immunization method, consisting of whole live parasites.

The ITM vaccine was developed first by the former East African Veterinary Research Organisation, at Muguga, Kenya, between 1967 and 1977, now known as the Veterinary Research Centre, which is part of the Kenya Agricultural Research Institute (KARI) and which has continued to refine the vaccine.

ILRI produced the first commercial batch of the ITM vaccine in the late 1990s, at the request of the Food and Agriculture Organization of the United Nations. A decade later, on request from regional stakeholders, ILRI produced a second batch, which is now being used in East Africa. ILRI and KARI also supported Kenya’s Director of Veterinary Services (DVS) in his department’s successful trials that have confirmed the safety and effectiveness of the ITM vaccine, thus making way for the launch of its national distribution today.

Two ILRI scientists, Phil Toye and Henry Kiara, that have been involved in this research for many years are attending the launch. They say that East Coast fever continues to cause major economic and social losses to families in eastern, central and southern Africa.

Of the 46 million cattle in this region almost half are at risk from this disease, say Toye and Kiara.

‘ILRI’s work has focused on better understanding of the biology of the parasite that causes the disease and the host immune responses to infection. While the ITM vaccine was developed in the early 1970s at Muguga, Kenya, the vaccine was not readily taken up due to inadequate understanding of the biology and epidemiology of the diseases at the time.’

Scientists in KARI and ILRI continued to refine the technology to the point where it was deemed safe and effective to distribute the vaccine on a commercial basis to farmers. ILRI will continue working with Directors of Veterinary Services in the region to address any research questions that may arise as we continue to use this technology.

It gives me great pleasure today to congratulate the Kenya Department of Veterinary Services on this great occasion of the launch of the East Coast fever vaccine. ILRI is proud to have played a role in this and will continue to offer any research support needed to keep Kenya’s cattle safe from this deadly disease.—Phil Toye