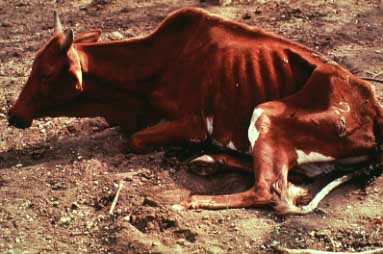 Scientists at the University of Liverpool, in the UK, and the International Livestock Research Institute (ILRI), in Kenya, are working with 11 other African and European partners on a US$4.4-million (UK£3 million-) project to develop climate-based models that will help predict the outbreak and spread of infectious diseases in Africa.

The researchers are working to integrate data from climate modelling and disease-forecasting systems so that the model can predict, six months in advance, the likelihood of an epidemic striking. The research, funded by the European Commission Seventh Framework, is being conducted in Ghana, Malawi and Senegal. It aims to give decision-makers the time needed to deploy intervention methods to stop large-scale spread of diseases such as Rift Valley fever and malaria, both of which are transmitted by mosquitoes.

It is thought that climate change will change global disease distributions, and although scientists know a lot about the climate triggers for some diseases, they don’t know much about how far into the future these disease events can be predicted. This new project brings together experts to investigate the links between climate and vector-borne diseases, including ‘zoonotic’ diseases, which are transmissible between animals and humans.

ILRI veterinary researcher Delia Grace says that diseases shared by people and animals are under-investigated although they are critically important for public health. ‘Fully 60% of all human diseases, and 75% of emerging diseases such as bird flu, are transmitted between animals and people,’ she said.

ILRI geneticist Steve Kemp said that the project is making use of ILRI’s advanced genomics capacities to analyse pathogens from the field and to integrate the data collected on both pathogen distribution and climatic factors. ‘From ILRI’s point of view,’ Kemp said, ‘this project is particularly exciting because it brings strong climate and weather expertise that complements systems recently built by ILRI and its partners to detect outbreaks of Rift Valley fever and to determine its spread.’

The new project also complements ILRI’s ongoing work to better control trypansomosis in West African livestock, a disease transmitted by tsetse flies. Trypanosomosis, which is related to sleeping sickness in humans, causes devastating losses of animals—along with animal milk, meat, manure, traction and other benefits—across a swath Africa as big as continental USA. Members of the new modeling project will conduct research in some of the same locations as ILRI’s West African trypanosomosis project, Kemp explained, and work with some of the same partner organizations, which should generate synergies that benefit both projects.

The risk of epidemics in tropical countries increases shortly after a season of good rainfall—when heat and humidity allow insects, such as mosquitoes, to thrive and spread diseases. Matthew Baylis, from Liverpool’s School of Veterinary Science, explained how this works with Rift Valley fever: ‘Rift Valley fever can spread amongst the human and animal population during periods of heavy rain, when floodwater mosquitoes flourish and lay their eggs. If this rainfall occurs unexpectedly during the dry season, when cattle are kept in the villages rather than out on the land, the mosquitoes can infect the animals at the drinking ponds. Humans can then contract the disease by eating infected animals. Working with partners in Africa, we can bring this information together to build a much more accurate picture of when to expect epidemics.

Andy Morse, from Liverpool’s School of Environmental Sciences, said the project combines historical and contemporary climate data with disease incidence information, including that for vector-borne diseases, as well as integrating monthly and seasonal forecasts. The resulting single, seamless, forecast system, Morse said, should allow projections of disease risk to be made beyond the conventional predictable time limit. ‘All this information will be fed into a decision-support system to be developed with decision-makers on national health issues’ in the three target countries.

The project was launched at a conference at the University of Liverpool on 19 April 2010.