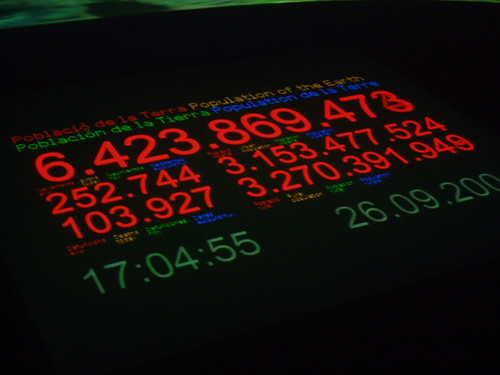 Population of the Earth on 26 September 2004, last day of a Fòrum Universal de les Cultures event in Barcelona, where this counter was and this photo was taken (image on Flickr by Daniel Daranas, horitzons inesperats).

Speaking on ‘Sustainable food systems for food security’, Marianne Banziger, a scientist at the CGIAR maize and wheat centre (CIMMYT), this afternoon gave a ‘Rank Lecture’ at the Planet Under Pressure Conference in London.

She began with a bald statistic: To meet the food security challenges converging over the next 50 years, she said, we will have to produce as much food as has been consumed over the entire history of humankind.

Things did not get better after that.

We can expect more food price hikes, she argued, like those the world experienced in 2008 and 2010. Those peaks were due to low stocks; food prices went up three-fold and food prices have never returned to 2006 levels.

A large part of the changing food situation, Banziger explained, is due to the many people in developing countries that are newly incorporating into their largely starch-based diets meat, milk and eggs. However, most people gaining a bit of disposable income for the first time and using it to buy animal-source foods are still consuming far less of these foods than people in rich countries.

Biofuels are complicating the situation further: some 40% of the US maize crop now goes to biofuel, which is more than what is produced for animal feed.

Food price increases push people back into poverty, she reminded her audience. As food prices increase, and people find food less and less affordable, the proportion of their consumption of staple crops increases. If we do not act, food and energy price inflation will exceed income growth of the poor—pushing them further into poverty.

Living on borrowed resources
What goes up must come down: As fertilizer prices go up, the profitability and yields of smallholder farmers in developing countries go down.

Some 300 million people in India and China are sustained with grain grown from the over-pumping of water (that is, water resources not renewed by rainfall).

Social unrest is likely to come back again and again; deforestation, water scarcity and human migration are all likely to increase,

We still have the time to act.
Science usefully provides us with options.

We could reduce our consumption of food. How many of us now recycle and conserve water? Reduce food wastage? Eat less meat? These actions reduce demand. Those people now climbing out of poverty have as much right as we do to eat well.

On the other hand, we could increase our production of food.

The more we delay investments in this, the steeper will be the challenges we face.

Among new opportunities for increasing productivity are use of precision agriculture and cell phones (for conducting financial transactions, buying crop and input insurance).

We should not make the same mistakes as in the past by focusing on higher productivity alone. Farmers also need to generate greater income, to build greater resilience to shocks, to conduct sustainable farming, and to access viable markets and value chains.

Eyes wide open
Closing the yield gap among today’s marginalized farmers will not be enough, Banziger said. Farmers in the Indo-Gangetic Plains now grow wheat for 700 million people. But the encroachment of heat on these plains is expected to reduce yields 20–30% by 2050.

We need to explore the untapped biodiversity of staple crops. Drought-tolerant maize varieties have succeeded in the past. We’re looking for heat tolerance in wheat. Will transgenics be needed? The challenges are extreme, so ‘we need to keep our eyes open’.

Catch 22
At the close of Banziger’s presentation, a population expert in the audience asked what he might have presumed to be a rhetorical question: Why had Banziger omitted all reference to reducing the human population as a main method of ensuring food security?

Banziger responded forthrightly: It is not the increasing numbers of people per se that is the greatest factor in our food challenges, she said. Rather, it is the great numbers of people who are escaping absolute poverty (especially in India, China and Southeast Asia), and who are improving the quality of their diets as they do so by adding animal-source and other highly nutritious foods to their daily meals.

The implications are that reducing the numbers of people on the planet will not solve our food problems if great numbers of those people that remain keep moving out of poverty–a trajectory that many of this conference’s delegates are spending their professional lives working to advance.

Read more about the Planet Under Pressure conference:
ILRI News Blog: Planet under pressure / Livestock under the radar, 26 Mar 2012.