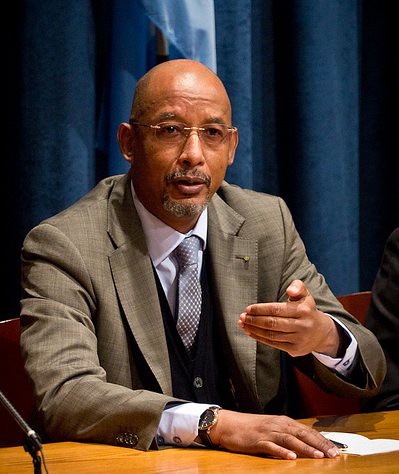 CAADP is the vehicle for Africa’s response to challenges in agricultural development. It is based on inclusiveness and evidence. Ten years after its launch, CAADP was able to re-mobilize around agricultural development. We are at a time when we need to sustain the momentum, especially in clarifying the vision we have on agriculture in the next decades. This is what should provide a framework for research objectives.—Ibrahim Assane Mayaki, CEO of NEPAD

Below are other research-focused excerpts, edited for brevity, from the keynote Ibrahim Mayaki gave last week.

The importance that NEPAD attaches to science and innovation is reflected in the mandate it received for implementing Africa’s Science and Technology Consolidated Plan of Action.

The place given to research as one of the four pillars of CAADP is also a reflection of this fact.

When CAADP was launched, there was the acute perception that research was required to recover the position it had dramatically lost during the structural adjustment period. From 1991 to 1999, public expenditures on agricultural research in sub-Saharan Africa fell in real terms while at the same time the demand for crop products in Africa increased by 40%.

Fortunately, things have changed over the last decade, with a renewed interest in research that is reflected in spending increase of about 2.6% per year in real terms against 1% in the previous decade.

However, the expenditure still remains below levels existing prior to the devastating effects of structural adjustment.

Efforts in agricultural research remain below the target of 1% of agricultural GDP which can be derived from the general commitment that African leaders had taken in 2006 to allocate 1% of global GDP to research and development. The number of countries that have achieved it is very close to that of countries that comply with the target set in Maputo in 2008 to spend 10% of public expenditure on agriculture.

In sub-Saharan Africa, for each million agricultural workers, there are less than 70 full-time agricultural researchers.

Involvement of the private sector in financing research has been presented as an option but examples are too few to be presented as a general model.

Most public research institutions have restructured their systems to become more responsive and accountable to stakeholders (clients, farmers, agribusinesses and consumers) and to introduce sound financial and accounting systems.

We need to rebuild institutions and improve governance; the decay of research systems over a long period still undermines the effectiveness of research.
Problems
1. Career advancements have been limited while working conditions have deteriorated, leading to an erosion of skills of researchers.
2. Capital is being eroded, with most funds used to pay wage increases or rehabilitate infrastructure and equipment at the expense of increased research production.
3. Due to lack of means, engagement of researchers in field work is limited, with most researchers remaining in their offices, focusing on desk work disconnected from reality.
4. Research faces cultural and societal prejudice, leading to an overwhelming disproportion of men in its structures while the agricultural world is vibrant thanks to the work of women.

Major areas for further efforts
1 Maintain a critical mass of research at the national level.
2 Have an open approach to private research.
3 Integrate research in a two-way knowledge system with farmers, extension workers and others.
4 Evaluate researchers based on development objectives rather than their publishing record in scientific journals.

Give special attention to the entrepreneurial role of women. Women, not only reinvest in their businesses, but also place high value on social investments in their communities.—Ibrahim Assane Mayaki, CEO of NEPAD

To meet development challenges, research must address political, societal and technical concerns
1 At the political level, we must maintain the control of our knowledge production system and increase our capacity; dependence on external funding will not allow research to take over our agricultural destiny. Tax revenues rose from $140 billion in 2002 to over $500 billion in 2011. We no longer have an excuse not to strengthen our human capital and knowledge.

2 At the societal level, we need to better listen to local knowledge and be open to foreign knowledge. Misunderstandings about the role of innovation, especially in the field of biotechnology, are often indicative of an approach that is too narrow.

3 At the technical level, we need to better align with, and meet, demands while also considering conditions needed for farmer adoption of technologies. Risk aversion should be part of research concerns.

. . . With the growing global uncertainty and external pressure on our natural resources, we should think of upgrading the African food security strategy to a food sovereignty strategy . . . . At a more technical level, we certainly should promote the preference for sustainable farming systems that are labor intensive and we should give much more emphasis to farming as a business. . . .
Change and transformation in agriculture must start from within the continent and its men and women, especially with smallholder farmers that are the majority and have the highest potential for change. . . .—Ibrahim Assane Mayaki, CEO of NEPAD

About AASW6
FARA’s 6th Africa Agriculture Science Week (AASW6), in Accra, Ghana, included marketplace exhibitions (15–20 Jul 2013), side events on sub-themes (15–16), a ministerial roundtable alongside a Ghana Day (17 Jul), plenary sessions (18–19) and a FARA Business Meeting (20 Jul). The discussions were captured on Twitter (hashtag #AASW6) and blogged about on the FARA AASW6 blog.

About Ibrahim Hassane Mayaki
Ibrahim Assane Mayaki, chief executive officer of NEPAD, has served his country, Niger, as both minister (in the ministries of African Integration and Cooperation and Foreign Affairs) and prime minister. As prime minister of Niger, Mayaki played a catalyst role in enhancing social dialogue in the country. He holds a master’s degree from the National School of Public Administration, in Québec, and a PhD in administrative sciences from the University of Paris I. Mayaki was professor of public administration and management in Niger and Venezuela and worked for ten years in Niger’s mining sector. From 2000 to 2004, Mayaki was a visiting professor at the University of Paris XI, where he taught international affairs and organizations and led research at the Centre for Research on Europe and the Contemporary World. In 2011, the French government awarded Mayaki the medal of Officer in the National Order of Agricultural Merit.