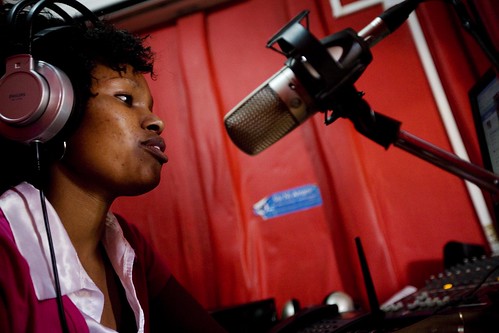 A Ghanaian radio presenter talks with farmers during a broadcast. Participatory radio can hasten adoption of new technologies by smallholder farmers in Africa (photo from Flickr, Gates Foundation).

A recent study by Farm Radio International shows participatory radio campaigns that use local languages, allow farmer participation and that highlight tested and available technologies are particularly useful in hastening the adoption of new technologies by small-scale farmers in Africa.

In an experiment carried out between 2007 and 2011 under the African Farm Radio Research Initiative, Farm Radio International tested a participatory radio campaign in in Ghana, Malawi, Mali, Tanzania and Uganda. The campaign carried out 49 participatory radio campaigns through 25 state, community and religious radio stations across the 5 countries.

Nearly 80 percent of small-scale farmers in Africa have access to radio and farm radio broadcasts have existed in the continent for a long time but most have not inspired large-scale change.

The African Farm Radio Research Initiative wanted to see how radio could be used to reach farmers at a larger scale. Using radio broadcasts that explained available and tested farming improvements, the initiatives focused on what farmers in the target communities said they wanted. Broadcasts were then scheduled at times that were most convenient to the farmers in each region. The programs featured interviews and content from members of participating ‘active communities’ and each week a successful farmer’s experience was featured in the shows. Listeners were asked to decide if they would try the improvement they had heard about and they were given a chance to comment and be heard through live calls and short message service (SMS).

The study compared the reach and impact of 14 participatory radio campaigns in a participating community and a control community which never received the signals. The experiment also assessed the impact of the broadcasts in the larger community that was reached by the broadcasts.

‘The results were compelling,’ says David Mowbray, the manager in charge of training and standards at Farm Radio. ‘We found that 39 percent of the active listeners and 22 percent of the passive listeners had started new practices to improve their farming since the start of the broadcasts,’ he said. Mowbray, who presented the findings of the survey at the International Livestock Research Institute (ILRI) on 17 September 2012, said that as a result of the initiative, nearly 1 million small-scale farm households tried what they heard on radio in the 5 countries.

‘The participatory radio campaign approach worked because radio programs were broadcast in local languages and allowed farmers to learn from each other,’ said Mowbray.

Farm Radio is now carrying out a follow-up survey to investigate how the adoptions spread after the end of the campaign and if the early adopters have continued using the methods they learnt. The organization hopes to scale out the methodology used in this study to other parts of Africa.

To find out more about the approach visit www.farmradio.org