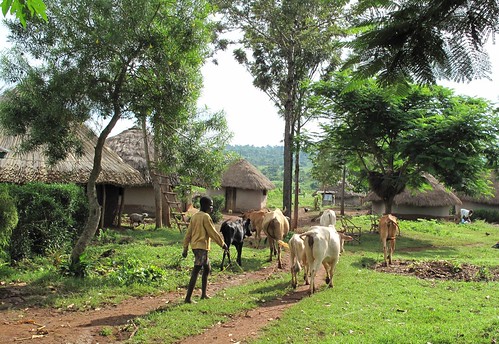 A new effort to align the work of partners in eastern Africa and implement more synergetic research on Rift Valley fever was the focus of a recent multi-stakeholder workshop that reviewed research strategies and approaches used by veterinarians, epidemiologists, economists and public health experts in projects across Kenya.

The meeting, which was held at the International Livestock Research Institute (ILRI) on 2 February 2012, discussed ILRI’s Rift Valley fever research program, potential collaborations with partners and options of controlling the mosquito-borne viral disease that affects cattle herds in eastern and southern Africa. Epidemics of the disease, which can also infect humans, emerge after above-average and widespread rainfall and lead to death and abortion in livestock.

Participating organizations, which are conducting research on Rift Valley fever, included Kenya’s ministries in charge of livestock development and public health, the universities of Nairobi and Egerton, Kenya Agricultural Research Institute and Kenya Medical Research Institute. Also attending the workshop were staff of the African Union Interafrican Bureau for Animal Resources (AU-IBAR), Swiss Tropical and Public Health Institute, the Nairobi office of the US Centres for Disease Control and Food and Agriculture Organization of the United Nations (FAO).

‘Our research in Rift Valley fever is benefitting from increasing collaboration,’ said Bernard Bett, an epidemiologist with ILRI. ‘These “joined up” efforts, are supporting joint assessments of the prevalence of zoonotic diseases in both animals and humans and are helping to increase the relevance of the research leading to more effective interventions.’

This strategy should lead to lower costs of doing research and implementing human and animal health interventions and a reduced burden of Rift Valley fever on the region’s livestock, people, wildlife and markets.

Esther Schelling, a epidemiologist with the Swiss Tropical and Public Health Institute, and formerly a researcher with ILRI, said: ‘Collaborative efforts in addressing the challenge of Rift Valley fever can support “one health” initiatives that seek to raise the research profile of neglected zoonotic diseases in Africa and improve the effectiveness of interventions through joint surveillance, preparedness and contingency planning to reduce the amount of time it takes to control outbreaks of these diseases.’

During the meeting, ILRI shared findings from a collaborative project known as ‘Enhancing prevention and control of Rift Valley fever in East Africa by inter-sectorial assessment of control options.’ For example, an analysis, by the project, of the public health burden of Rift Valley fever outbreaks measured in disability adjusted live years (DALYs) – the first of its kind in Kenya – shows that the 2006 and 2007 outbreak resulted in 3.4 DALYs per 1000 people and household costs of about Ksh 10,000 (USD120) for every human case reported. In 2008, ILRI estimated the disease cost the Kenyan economy USD30 million. Findings from the project also included a dynamic herd model developed for pastoral systems for simulating herd dynamics during normal and drought periods and in Rift Valley fever outbreaks. This model will be used to simulate the impacts of prevention and control options for the disease.

The Nairobi meeting discussed gaps in current research practice including the absence of climate models, sampling tools and methods to support decision support tools. Participants highlighted the need for a vector profile of the disease to enable mapping of most affected and high-risk areas and the need to understand how Rift Valley fever interacts between livestock and wildlife.

The prevention and control options discussed at the meeting will be further simulated using the herd dynamic model, which will be followed by an economic analysis using a process that was agreed on in an earlier (September 2011) workshop that discussed Rift Valley fever surveillance. A cost-benefit analysis of vaccination, vector control, surveillance, and sanitary measures is now scheduled. Results from the analysis will give much-needed evidence to support creation of policies and strategies for appropriate surveillance, prevention and control of Rift Valley fever in eastern Africa.

According to Tabitha Kimani, an agricultural economist with ILRI, ‘preliminary cost benefit analysis is already showing that it is beneficial to control Rift Valley fever through vaccination.’

Read more on Rift Valley fever research at ILRI and the region: