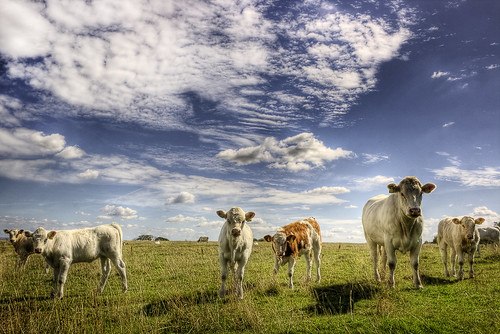 ‘The children of the corn’ (photo on Flickr by Andrés Thor).

Conspicuous by its absence at the recent Planet Under Pressure (PUP) conference in London (26–29 Mar 2012) was the topic of livestock production. While several presenters, panel members and other delegates did mention in passing the need to cut back on meat consumption to save the planet from the emissions of greenhouse gases generated in the production of meat, there was scarce mention of the 1.3 billion people who rely on livestock for their livelihoods or the nearly 1 billion people who are undernourished, or the fact that livestock production contributes up to 50 per cent of the gross domestic product of poor countries, or that global meat demand is expected to far outstrip that of grain, growing by 40 per cent by 2025.

Livestock are the backbone of small-scale agriculture and economic development throughout the developing world, helping poor households and communities endure shocks such as drought and price fluctuations; and providing them with manure to fertilize soils and traction to pull ploughs; high-quality foods they can either consume or sell; rural and peri-urban jobs and livelihoods; and a regular cash income from sales of milk and eggs and surplus stock with which to pay for medical bills, children’s school fees and other essentials.

That’s the good news. The bad news is that raising and selling livestock also carries risks and causes harm. Here, for example, is a statement from Livestock’s Long Shadow, the rather famous (in agricultural development circles) report of a study published in 2006 by the Food and Agriculture Organization of the United Nations (FAO):

The livestock sector emerges as one of the top contributors to the most serious environmental problems, at every scale from local to global. The findings of this report suggest that it should be a major policy focus when dealing with problems of land degradation, climate change and air pollution, water shortage and water pollution, and loss of biodiversity. Livestock’s contribution to environmental problems is on a massive scale and its potential contribution to their solution is equally large. The impact is so significant that it needs to be addressed with urgency.’ — Livestock’s Long Shadow, FAO, 2006.

Despite livestock issues having been at the centre of public debates about livestock ‘goods’ and ‘bads’, especially since Livestock’s Long Shadow came out, with its report that livestock production comprises 18 per cent of the greenhouse gasses generated by humankind, the problematic (and often impassioned) livestock topic was hardly raised at PUP. (One panel session was scheduled for this topic, but an emergency prevented some of the panel members from attending the conference and the session was cancelled.) That’s a shame, since many of PUP’s nearly 3,000 delegates have the kind of scientific training to have tackled global livestock ‘goods’ and ‘bads’ with dispassion, evidence and credibility.

It will be interesting to see if this topic is seen to merit attention at the, much larger, Rio+20 sustainable development conference this June.

What do you think? Are livestock issues of sufficient import to justify their inclusion in presentations and discussions at Rio+20? Please post your thoughts in the Comments box.

To read some of ILRI’s views on the livestock goods and bads debates, visit this Pinterest page, where several ILRI articles on the subject are posted.