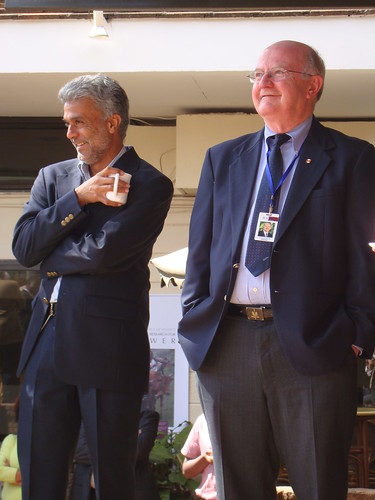 Canadian Lorne Babiuk, an internationally recognized leader in vaccine research, visited the International Development Research Centre (IDRC) in Ottawa yesterday (8 Oct 2013) to deliver a live webcast talk on exciting breakthroughs in the development of animal vaccines, which, he argued, can both improve global food security and reduce the global impacts of infectious diseases.

Babiuk is vice-president of research at the University of Alberta and the recipient of two recent distinguished awards for his outstanding career in vaccinology — the Gairdner Wightman Award in 2012 and the Killam Prize in Health Sciences in 2013. He serves on the board of trustees of the International Livestock Research Institute (ILRI).

For all his illustrious awards, Babiuk talked not like a scientist but rather like ‘a regular guy’, preferring to speak of  ‘scissors’ and ‘crazy glue’ to describe molecular advances in vaccinology rather than use scientific jargon.

Here’s some of what he said.

ON POVERTY
One billion people go to bed hungry every night. Not hungry like you and me when we miss a meal. But hungry, really hungry, every day, day in and day out. By 2050, we’ll have another 2 billion people to feed. The last time I checked, they were not making more land. So we’re going to have to do more with the land (and livestock) that we have. We have an opportunity to develop new approaches to increase food supplies or to have a lot more hungry people.

The developing world is looking for more and more protein; those of us in the developed world should not deny them that.

Livestock are a critical component of smallholder farming, which supports about two billion people, some two-thirds of them women

ON DISEASE
I’ve spent my career in infectious diseases. They matter partly because they cost so much. Alberta has still not recovered from BSE. And SARS cost a staggering USD100 billion—USD2 billion in Ontario alone.

Some 74% of new or emerging diseases are ‘zoonotic’, which means they’re transmitted from animals to humans, or from humans to animals. The economic impacts of zoonoses are huge for farmers, for producers, for international traders . . .

ON DISEASES OF THE DEVELOPING WORLD
I have concerns about Rift Valley fever spreading to North America. The West Nile virus, which has the same kind of vector, has already arrived here.

ON BIOTECH
Technology and biotechnology can be a saviour, but it’s a challenge because we have a large number of people against genetically modified food. We have to work with social scientists to make sure we have healthy animals for healthy people

ON RESEARCH
Basic research and applied research are two sides of the same coin—the two of them need each other.
We no longer train our biologists in broad biology but rather in narrower molecular biology studies. That’s a mistake.
We biological scientists must get smarter at engaging social science and scientists.

ON VACCINES
Vaccination has saved more lives than all other treatments and prophylactics combined.
The traditional types of vaccines, live or killed, have given way to really interesting new types.
We eradicated smallpox with a vaccine; that research would never be approved today because the vaccine has too many side effects.
What can we do to change perceptions of vaccines and biotechnology?
It costs something in the order of one billion dollars to get a vaccine approved.

ON VACCINES FOR THE DEVELOPING WORLD
The major obstacle in Africa is to get a commercial company to invest in the regulatory component of a vaccine because there isn’t a financial incentive. You can’t sell a livestock vaccine for much more then 50 cents per dose in a developing countries. That’s why we have to work with African or Asian vaccine companies, which can produce vaccines much cheaper than industrial countries can.

Several diseases in the developing world are protozoan and those are, of course, much bigger challenges. But there have been new donors for protozoan vaccine research. We need to convince more donors that this research is needed.

ON THE ANTI-VACCINE LOBBY
I’m an evangelist for vaccination because I think we have lost the battle to the anti-vaccine lobby. In North Amercia there is a huge anti-tech group. They misquote or use data to push their own agenda at the expense of large numbers of lives lost. Look at the article published decades ago about a possible link between vaccination and autism. Despite decades of subsequent research showing no such links, we still haven’t managed to convince a lot of people that vaccines do not cause autism.

How do we encourage the scientific community to stand up and be more vocal about what they know? We have to continue to advocate and demonstrate what we can do using the new technology. We should promise less and deliver more. We have been our own worst enemies. We have to be realists and say what can be done in what time period. That will give us back some credibility.

People go into science because they like doing the science part of it. If they loved the podium, they would have gone into the social sciences. We need to encourage others to do this kind of communication.

ON TEAM DYNAMICS
Any successful researcher has to stimulate the team around him or her and make them all feel part of something big. Getting people excited about working together as a team, providing a vision, and saying how the team can achieve something, that’s what I’m good at. Get people passionate about something and get them to know it’s their idea. I’m a facilitator. I don’t tell people what to do. I create an environment that facilitates what they do. You have to accept different cultures, different ways of doing science. You have to have patience and go with the flow. I learned patience.

ON HIS SUCCESSFUL CAREER
I still get up in the morning and put one leg in my pants and then the other, just like everyone else.

About CIFSRF
Lorne Babiuk manages a grant funded by the Canadian International Food Security Research Fund (CIFSRF), among others. CIFSRF is a CA$124.5-million program of IDRC undertaken with financial support from the Government of Canada. CIFSRF supports applied research partnerships between Canadian and developing-country organizations to find lasting solutions to hunger and food insecurity. It is a core element of Canada’s Food Security Strategy. 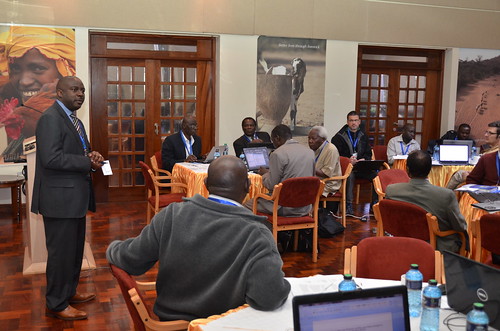 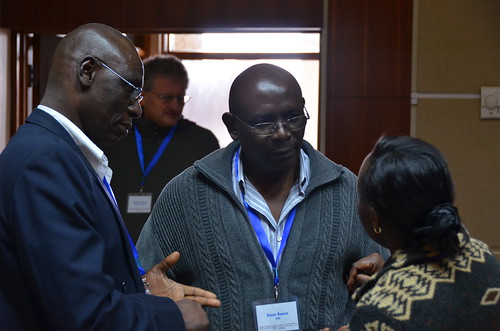